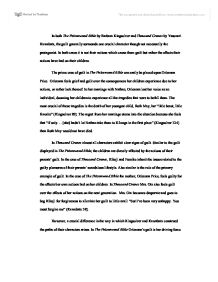 In both The Poisonwood Bible by Barbara Kingsolver and Thousand Cranes by Yasunari Kawabata, the guilt generally surrounds one crucial character though not necessarily the protagonist. In both cases it is not their actions which cause them guilt but rather the effects their actions have had on their children. The prime case of guilt in The Poisonwood Bible can easily be placed upon Orleanna Price. Orleanna feels grief and guilt over the consequences her children experience due to her actions, or rather lack thereof. In her marriage with Nathan, Orleanna lost her voice as an individual, dooming her children to experience all the tragedies that were to befall them. The most crucial of these tragedies is the death of her youngest child, Ruth May, her "little beast, little favorite" (Kingsolver 89). The regret from her marriage stems into the situation because she feels that "if only. ...read more.

In The Poisonwood Bible Orleanna's guilt is her driving force to move her through life. She feels that the grief that is so closely tied with her guilt can only be avoided by constantly moving forward: As long as I kept moving, my grief streamed out behind me like a swimmer's long hair in water. I knew the weight was there but it didn't touch me. Only when I stopped did the slick, dark stuff of it come floating around my face, catching my arms and throat till I began to drown. So I just didn't stop (Kingsolver 381). However, in somewhat of a paradox, this constant movement to escape personal confrontation of her guilt and grief ultimately leads her to just that. By running from her guilt she began anew and by doing so she came to terms with herself and was able to return to the Congo to try to finally reach closure by marking Ruth May's grave. ...read more.

This incessant need for forgiveness displays that she has, like Orleanna Price, attempted to escape her agonizing guilt. However Mrs. Ota attempts to mask her guilt from the others: "'Forgive me. The things I've done. The things I've been guilty of.' A tear spilled over from the corner of her eye." (Kawabata 63). However, this is followed by Mrs. Ota's own foreshadowing of her demise as she goes on to say, "I want to die. It would be so pleasant to die now." (Kawabata 63). Ultimately, Mrs. Ota takes her own life. Fumiko and Kikuji believe that she had "died asking to be forgiven" (Kawabata 75) but Kikuji supplements Fumiko's contention by saying that "between the living and the dead there can be no forgiving and not forgiving." (Kawabata 77). Though these two women share common characteristics in their cases, they choose different paths towards acceptance and forgiveness. Orleanna Price chooses to persevere and move forward while Mrs. Ota becomes too enveloped in her guilt and depression that she chooses death. ...read more.