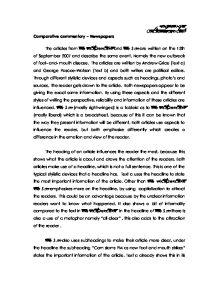 English A2 IB Charlotte.F.J.Walter Comparative commentary - Newspapers The articles from the Independent and the Sun are written on the 13th of September 2007 and describe the same event. Namely the new outbreak of foot- and- mouth disease. The articles are written by Andrew Grice (Text a) and George Pascoe-Watson (Text b) and both writers are political editors. Through different stylistic devices and aspects such as headings, photo's and sources, the reader gets drawn to the article. Both newspapers appear to be giving the exact same information. By using these aspects and the different styles of writing the perspective, reliability and information of these articles are influenced. The Sun (mostly right-winged) is a tabloid as to the Independent (mostly liberal) which is a broadsheet, because of this it can be known that the way they present information will be different. Both articles use aspects to influence the reader, but both emphasize differently which creates a difference in the emotion and view of the reader. ...read more.

Text a already shows this in its heading. This subheading is fairly informal because "Cam and PM" are abbreviations for the prime minister and Mr. Cameron. In the subheading "Questions", the paragraphs are the opinions of different sources in the article which criticize the situation. The subheading makes the structure clearer. As supposed to text a, where there are no subheadings needed because the information is shown clear in the heading. As sources add reliability to an article, both articles use sources. Some differentiate and some are identical. Mr. Cameron is one of the known sources that both of the newspapers have. "I think there is a real question about government competence" was shown in both of the articles, to indicate that this was probably a public conference and that everyone has access to this information. Because it is a source that more than one newspaper uses it can be assumed that this is reliable. Text a also has some other sources where it could be assumed that these are more reliable. ...read more.

Text b shows less pictures but shows a picture of Mr. Brown this is also used to show the reaction of Mr. Brown and helps the readers to understand that Mr. Brown is accused. This could possibly also relate to the fact that the Sun is a right- winged tabloid. Overall the photographs show in both of the newspapers the seriousness of the article and makes the reader understand faster and easier what is going on in the article. Both articles decided to emphasize on different aspects to create a perspective for the reader. The Sun decided to do this more with the headline, as to The independent which focuses more on pictures. Because of these aspects the readers view will differentiate after reading one of the articles. It would seem that with the Sun the reader gets influenced more because this shows clearly a right wing perspective as to the Independent who tries to only give information. No matter which aspect is used for a newspaper, each newspaper emphasizes more on a certain aspect than another to give their opinion towards the world in a subtle way. ...read more.