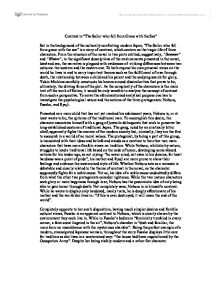 Contrast in The Sailor who fell from Grace with the Sea

Contrast in "The Sailor who fell from Grace with the Sea" Set in the background of the culturally conflicting modern Japan, "The Sailor who fell from grace with the sea" is a story of contrast, which centers on the tragic life of three characters. From the structure of the novel in two parts entitled, suggestively, "Summer" and "Winter", to the significant descriptions of the environments presented in the novel, land and sea, the narrative is plagued with evidences of striking differences between two cultures: the western and the eastern one. To both expose his own personal views on the world he lives in and to carry important themes such as the fulfillment of love through death, the relationship between a child and his parent and the undying search for glory, Yukio Mishima carefully constructs his heroes around dissimilarities that prove to be, ultimately, the driving force of the plot. As the complexity of the characters is the main trait of this work of fiction, it would be only sensible to analyze the concept of contrast from such a perspective. To serve the aforementioned analytical purpose one has to investigate the psychological nature and the actions of the three protagonists: Noburu, Fusako, and Ryuji. ...read more.

Completely opposite to her son's disposition, having much simpler desires and flexible cultural views, Fusako is an apparent contrast to Noburu, which is clearly shown by the environment they each live in. While in Fusako's bedroom "femininity trembled in every corner, a faint scent lingered in the air", Noburu's chamber is "drab and familiar, the room bore no resemblance with the mysterious chamber". Being the perfect example of a modern, emancipated Japanese woman, throughout the story Fusako displays little care for tradition as she lives in a westernized way: "the house had been requisitioned by the Occupation Army". Despite her being visibly modern and a rather flat character throughout the story, Fusako is a protagonist that, like Noburu , displays some items of contrast in her personality. Mishima has skillfully used clothes to both give his heroine a round character and an air of femininity and to emphasize the existence of inner contrast in her nature. Mostly, Fusako is wearing western clothes, but when she sees Ryuji for the last time at the end of the first part of the book, "Summer", she chooses "a cotton yukata so that Ryuji could have a last look at a woman in a kimono". ...read more.

Because of his willingness to appease the other two protagonists and his misconception of Noburu's dogma of stoicism, he proves to be a tragic hero, who, in spite of his cruel end, ironically becomes the only character in the book that has fully realized his destiny: "Glory, as anyone knows, is bitter stuff". Throughout the novel Ryuji has proved that not only does he have the disposition to combine the distinct conflicting philosophies of the other protagonists but he also dreads the divergent nature of things, a brief example being his inability to choose between land and sea, love and adventure, a pathetic existence and glory. All in all, by using such complex and dissimilar characters, the author manages to convey his impressions on the cultural environment in modern Japan and also express his own individuality. At a closer look, Mishima's contrasting personality would reveal traits that are present in the characterization of his heroes and that make them so vividly real. By using personal experiences and trying to communicate his private beliefs through his protagonists, Mishima's characters become more that mere people in a book. They become human beings with feelings, and the contrasting factors that the author uses is what makes them fully attain an extraordinary level of reality. ...read more.