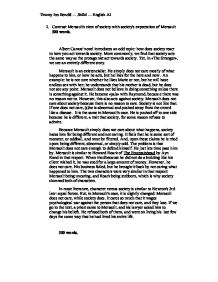 Contrast Mersault's View of Society with Society's view of Mersault

2. Contrast Mersault's view of society with society's expectation of Mersault 500 words. Albert Camus' novel introduces an odd topic: how does society react to how you act towards society. More commonly, we find that society acts the same way as the protagonist act towards society. Yet, in "The Stranger", we see an entirely different story. Mersault is an existencialist. He simply does not care mostly of what happens to him, or how he acts, but he lives for the here and now. An example: he is not sure whether he likes Marie or not, but he will have endless sex with her; he understands that his mother is dead, but he does not see any point. ...read more.

Society is not like that. If one does not care, (s)he is abnormal and pushed away from the crowd like a disease. It is the same in Mersault's case. He is pushed off to one side because he is different, a trait that society, for some reason refuses to admire. Because Mersault simply does not care about what happens, society hates him for being different and not caring. It feels that he is some sort of monster, or oddball, and must be filtered. And, upon these claims he is tried upon: being different, abnormal, or simply odd. ...read more.

The two characters were very similar in that respect: Mersault being uncaring, and Roark being stubborn, which is why society shunned both of characters. In most literature, character versus society is similar to Newton's 3rd law: equal forces. But, in Mersault's case, it is slightly changed: Mersault does not care, while society does. It cares so much that it wages psychological war against the person that does not care, and they lose. If we go to the text, a priest came to Mersault, and his lawyer asked him to change his beliefs. He refused both of them, and went on living his last few days the same way that he had lived his entire life. 500 words. Timmy Ivo Bendi� --- 3MM --- English A1 ...read more.