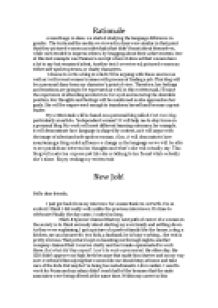 Creative writing - My written task will be based on a personal blog called Cest mon blog, particularly an article, independent woman.

﻿Rationale A month ago in class, we started studying the language difference in gender. The texts and the media we viewed in class were similar in that point that they pictured women as individuals that didn?t boast about themselves, while men tended to impress others, by bragging about their achievements. One of this text example was Tannen?s excerpt where it showed that women have a lot to say but remained silent. Another text I overviewed, pictured women as either soft-spoken person, or chatty characters. I choose to write a blog in which I?ll be arguing with these sources as well as I will reveal women?s issues with process of finding a job. This blog will be a personal diary from my character?s point of view. Therefore, her feelings and emotions are going to be expressed as well. In this written task, I?ll raise the experience of attending an interview for a job and securing the desirable position. Her thoughts and feelings will be mentioned as she approaches her goals. She will be empowered enough to transform herself and become a great leader. My written task will be based on a personal blog called C?est mon blog, particularly an article, ?independent woman?. ...read more.

Within my career in this company, I never got promoted while my male colleagues were able to get into top management positions. This working environment was too man-governed! My interview for Aussie Bank was pretty remarkable. I woke up at 4 am. I took a shower. I chose my outfit, which consisted of an elegant skirt and a silk blouse. As I drank my coffee I reread my script a thousandth time to make sure I was prepared enough. I packed my presentation into my Gucci bag and arrived 10 min ahead of the time. My interviewer was obviously a man, which doesn?t change a thing after all interviews I already attended. I shook his hand firmly and maintained eye contact. Before the first question was asked, I briefly introduced myself about my background and expertise. He raised his eyebrows in all admiration. The first question quite intrigued me when he asked me about my marital situation and then explained that he expected a fully work committed professional. Was he implying that I wouldn?t be devoted enough to that position? With no doubt, I replied that career is my priority and I?m fully capable to manage my work, either married or not. ...read more.

A secretary interrupted us calling him for a scheduled meeting. He had to leave but he asked his assistant to prepare the contract. I lost my Louboutin heels. I wanted to hug and kiss him. It was the most amazing feeling in my life. I guess my charm is irresistible. I overviewed the contract and couldn?t breathe as the war was over. Thankfully for him, I didn?t use my nuclear bomb. Mission complete. Here I?m giving advice, which took me so long to reach my goals. A real great woman said, ?a woman should be two things: classy and fabulous? aside from her talent, abilities and skills that she has been working on so hard. Women can be more than men believe we are capable of. We can do more than just be a typical housewife, we aren?t silent, we aren?t shy, and we can prove ourselves as we wish. Remember to be confident, puissant and believe strongly in yourself. The fact that you can put some make-up on your face doesn?t mean that you are Barbie. There are more layers to you than what is thought. Women are strong, women are powerful, women are smart, and women can wear pants if they are in the mood for. Success shouldn?t be defined by gender. ...read more.