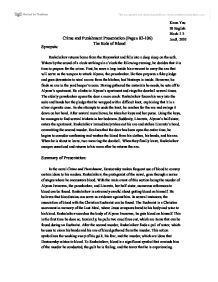 Kiana Yau IB English Block 1-3 Jan.8, 2010 Crime and Punishment Presentation (Pages 82-106) The Role of Blood Synopsis: Raskolnikov returns home from the Haymarket and falls into a deep sleep on the sofa. Waken by the sound of a clock striking six o'clock the following evening, he decides that it is time to prepare for the crime. First, he sews a loop inside his overcoat to carry the axe that will serve as the weapon to attack Alyona, the pawnbroker. He then prepares a fake pledge and goes downstairs to steal an axe from the kitchen, but Nastasya is inside. However, he finds an axe in the yard keeper's room. Having gathered the materials he needs, he sets off to Alyona's apartment. He climbs to Alyona's apartment and rings the doorbell several times. The elderly pawnbroker opens the door a mere crack. Raskolnikov forces his way into the suite and hands her the pledge that he wrapped with a difficult knot, explaining that it is a silver cigarette case. ...read more.

Raskolnikov is extremely careful about getting blood on himself. He believes that blood stains can serve as evidence against him. In several instances, the association of blood with the Christian Eucharist can be found. The Eucharist is a Christian sacrament in memory of the Last Meal, where Jesus compares bread to his body and wine to his blood. Raskolnikov searches the body of Alyona Ivanovna, he gets blood on himself. This is the first time he does so. Ironically, he pulls two crucifixes out, which are items that can be found during an Eucharist. After the second murder, Raskolnikov finds a pail of water, which he uses to clean his hands and his axe of blood gathered from the murder. This action symbolizes the washing away of his guilt, his fear, and the murder, which are ideas that Dostoevsky relates to blood. To Raskolnikov, blood is a significant symbol that reminds him of the murder he conducted, the guilt he is feeling, and the terror that he is experiencing. ...read more.

This cleansing action of Raskolnikov foreshadows his future salvation and redemption. Torpor: noun - state of mental and motor inactivity with partial or total insensibility "And suddenly an extraordinary, feverish and somehow helpless turmoil seized hold of him, in place of his slumber and torpor" (p.83). Procure: verb - to get possession of "The needle and thread he had procured long ago, he kept them in his bedside table" (p.84). Casuistry: noun - a resolving of specific cases of conscience, duty, or conduct through interpretation of ethical principles or religious doctrine "His casuistry had been whetted sharp as a razor, and he was unable to find any more conscious objections within himself" (p.86). Impasse: noun - a predicament affording no obvious escape "A circumstance of the most trivial kind landed him in an impasse even before he got to the bottom of the stairs" (p.88). Gadding: verb - to be on the go without a specific aim or purpose "Where the devil can she have gone gadding off to?" (p.102) Vocabulary: ?? ?? ?? ?? ...read more.