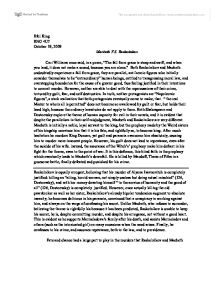 Crime and Punishment vs. Macbeth

Bibi King ENG 4U7 October 19, 2009 Macbeth V.S. Raskolnikov Cari Williams once said, in a poem, "The fall from grace is steep and swift, and when you land, it does not make a sound, because you are alone." Both Raskolnikov and Macbeth undoubtedly experience a fall from grace, they are parallel, anti heroic figures who initially consider themselves to be "extraordinary" human beings, entitled to transgressing moral law, and overstepping boundaries for the cause of a greater good, thus feeling justified in their intentions to commit murder. However, neither are able to deal with the repercussions of their crime, tortured by guilt, fear, and self destruction. In truth, neither protagonists are "Napoleonic figures", a stark realization that both protagonists eventually come to make, that " the real Master to whom all is permitted" does not become so swallowed by guilt or fear, but holds their head high, because the ordinary laws/rules do not apply to them. Both Shakespeare and Dostoevsky explore the theme of human capacity for evil in their novels, and it is evident that despite the parallelism in their self misjudgment, Macbeth ...read more.

This is evident as he supports Marmeladova's family after his death, and assists Marmeladov and others (such as the intoxicated girl) on many occasions when the need arises. Finally, he confesses to his crime, and assumes repentance, both to the law, and to providence. Fate and chance had a large part to play in the murders that Raskolnikov and Macbeth conduct. On many instances, it was evident that Raskolnikov stumbles on information by chance. A prime example of this is when Raskonikov overhears Lizaveta mentioning her leaving the house the next day at seven. It was chance that Raskolnikov hears this as he himself exclaims that such a chance may not be present in the future. The significance of fate is further shown as the narrator mentions that "he [Raskolnikov] had no more freedom of thought, no will and that everything was suddenly and irrevocably decided," (65, Dostoevsky). Another event where fate and chance played an important role was the finding of the axe as a weapon. He fell asleep, and woke up with the timing being perfect; also he found a murder weapon relatively easily. ...read more.

Blood is shown as a symbol of guilt and as shown in Macbeth and Crime and Punishment, it is difficult to wash off. The paranoia of Raskolnikov is further shown as he hides the items he stole after murdering the pawn broker. The theft of the items and dispersing them to the poor was the initial reason of the murder, therefore for him to attempt to hide them shows his fear of becoming caught. Macbeth is also shown to be fearful, as in order to establish a foothold, searches for the witches for additional prophecies. He was fearful of what the future held; therefore he took precautions in order to avoid the possible dire outcomes. Raskolnikov and Macbeth are considered criminals within their respective stories. Both exhibited behaviors that is common within criminals such as excessive paranoia. As a result they both had punishment for their crimes. The main difference between the two characters was how their punishment was carried out. Raskolnikov repented for his crimes and confessed, while Macbeth did not confess which caused his eventually downfall. Both authors present confession and acceptance as a way for renewal, they both also show that guilt and paranoia can drive one mad. ...read more.