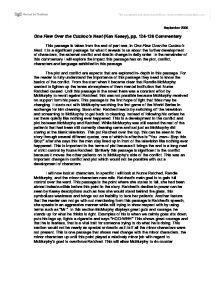 One Flew Over the Cuckoo's Nest (Ken Kesey), pp. 124-126 Commentary This passage is taken from the end of part one, in One Flew Over the Cuckoo's Nest. It is a significant passage for what it reveals to us about the further development of characters, the external conflict and drastic change in daily order. In the remainder of this commentary I will explore the impact this passage has on the plot, conflict, characters and language exhibited in this passage. The plot and conflict are aspects that are explored in- depth in this passage. For the reader to fully understand the importance of this passage they need to know the basics of the conflict. From the start when it became clear that Randle McMurphy wanted to lighten up the tense atmosphere of them mental institution that Nurse Ratched caused. Until this passage in the novel there was a constant effort by McMurphy to revolt against Ratched, this was not possible because McMurphy received no support form his peers. This passage is the first hope of light that tides may be changing. ...read more.

This was an important change in conflict and plot which would not be possible with out a development of characters. I will now look at characters, in specific I will look at Nurse Ratched, Randle McMurphy, and the minor characters new rolls. Ratched's main goal is to gain full control over the ward. This passage is the point where she states to fail, she had been almost indestructible before this point in the story. Ratched's decline in power can be seen by Kesey descriptions such as how she would stand behind the glass, this symbolizes weakness and brings out an inability to face her patients. Another feature that the reader can not go with out mentioning form this passage is Ratched's speech, she speaks in an aggressive manner while still trying to show respect with by using terms such as "Mr.". In this section McMurphy displays great guts and courage, he stands up for what he thinks is right. Examples of his is when we calmly goes sits down, puts his legs up, lights a cigarette and says "HOO-WEE!" ...read more.

In the first paragraph there are two very vivid examples that give us such a feeling that we were present. The words 'blew up" as well as "shoulders rise and fall as she breaths" are two examples. There terms paint an image in our minds that we can not resist to notice. As well as that imagery it has similes, one of which that I find effective is when Chief Bromden compares Ratched's voice to an electric chain say ripping through pine. Finally I believe that Kesey does an effective job emphasizing certain words which gives them a more significant sound. This can be seen in phrases such as "Mr. Har-ding", "I'm warning you" and "Hoo-wee(McMurphy)". All of these effects help enhance the significance of this passage. This is an important passage and it can be viewed as a turning point in both the plot as well as the conflict. The passage is supported by clear language as well as rapidly developing characters. After this passage the book could head in a number different directions, including a new support towards McMurphy which was witnessed in this passage. William Allen September 2008 September 2008 ...read more.