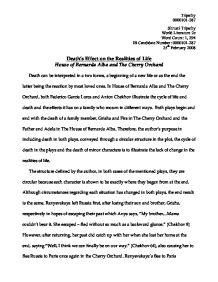 Shrusti Tripathy World Literature 2c Word Count: 1, 294 IB Candidate Number: 0000101-287 25th February 2008 Death's Effect on the Realities of Life House of Bernarda Alba and The Cherry Orchard Death can be interpreted in a two forms, a beginning of a new life or as the end the latter being the reaction by most loved ones. In House of Bernarda Alba and The Cherry Orchard, both Federico Garcia Lorca and Anton Chekhov illustrate the cycle of life and death and the effects it has on a family who mourn in different ways. Both plays begin and end with the death of a family member, Grisha and Firs in The Cherry Orchard and the Father and Adela in The House of Bernarda Alba. Therefore, the author's purpose in including death in both plays, conveyed through a circular structure in the plot, the cycle of death in the plays and the death of minor characters is to illustrate the lack of change in the realities of life. The structure defined by the author, in both cases of the mentioned plays, they are circular because each character is shown to be exactly where they began from at the end. ...read more.

One knows that death affects the living more than the one already departed, well, as far as we know and this can be seen in the opposing coping mechanisms of both families. Bernarda becomes more spiteful and tyrannical screaming at her daughters, "Give me the black one [fan], and learn to respect your father's memory!" (Lorca 205) while Ranyevskaya drowns in self-pity, "in the river here...my little boy was drowned , and I went utterly away, went meaning never to return, never to see this river again...pitilessly, brutally" (Chekhov 28) These different mechanisms just go to show that death doesn't affect the dead as much as the loved ones left alive with the memories. Bernarda's response is to wear black, trap all the household members at home to coerce them to grieve their father, even though they all know they should be moving on with their lives while Ranyevskaya's reaction is to leave everything and attempt to forget the river and her son. Although both mechanisms have negative aspects, it is interesting to note that Ranyevskaya is never said to be wearing black in mourning for her husband or son, in fact, in the plays, she's actually wearing white. ...read more.

It's a universal affliction or gift. However, in The Cherry Orchard, the only minor character who dies is Firs, at the end, whose death is not even known to the rest of the family who left him there by accident, "They've gone. They've forgotten about me. Well, never mind." (Chekhov 67) . Chekhov is trying to prove here that death in itself doesn't cause pain, it's the selfish love of the memory or helplessness wondering what they would do without their departed loved one. Death is the single abstract thought that unites and divides human beings at the same time. In House of Bernarda Alba and The Cherry Orchard, Lorca and Chekhov emphasize death as a motif with multiple purposes such as showing the circular structure in the plot, emphasizing relationships through the cycle of life and death and the death of minor characters all go towards understanding the truth about life and it's humdrum routine. In the plays, death has a cause and effect relationship with the plot, as one leads to another, however, they all end within the same frame, with almost no change. Death is one of the greatest mysteries of our time because the only people who know the answer are in no state to tell us, or we are in no state to listen. ...read more.