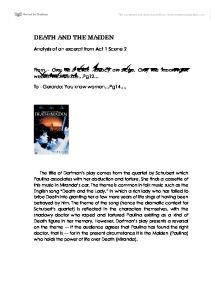 DEath and the maiden commentary

DEATH AND THE MAIDEN Analysis of an excerpt from Act 1 Scene 2 From - One hour later. Nobody on stage. Only the moonlight, weaker than before...Pg12... To - Gerardo: You know women...Pg14.... The title of Dorfman's play comes from the quartet by Schubert which Paulina associates with her abduction and torture. She finds a cassette of this music in Miranda's car. The theme is common in folk music such as the English song "Death and the Lady," in which a rich lady who has failed to bribe Death into granting her a few more years of life sings of having been betrayed by him. The theme of the song (hence the dramatic context for Schubert's quartet) is reflected in the characters themselves, with the shadowy doctor who raped and tortured Paulina existing as a kind of Death figure in her memory. ...read more.

Miranda speaks. The scene starts off with the description of the stage which is very important for this scene because it tells us that someone is knocking at the door and in doing so creates dramatic irony because we know that it is Dr. Miranda, a harmless person, while the characters are not sure about the person outside their house. On opening the door Gerardo finds out that it is Dr. Miranda and they have this conversation: Gerardo: Oh, It's you. God you scared the shit out of me. Roberto: I'm really sorry for this - intrusion. I thought you'd still be up celebrating Gerardo: You must excuse my... - do come in. Roberto enters the house Gerardo: It's just that we still haven't got used to it. ...read more.

Right after the conversation we can see that Paulina is slightly inquisitive or even slightly precautious because she moves closer to the men. "Paulina edges out onto the terrace from where she will be able to hear the men but not see or be seen by them." This is an important move in the play because this is the moment Paulina recognizes the voice of the person who had tortured her when she was held hostage during the military regime. The coercion shown by the old regime is symbolized by doctor Miranda while Paulina symbolizes the meek and timid people who have been traumatized but now have a voice in the new democratic system. They want justice; it's in them to get their revenge from those who have ruined their lives. This they can now do by using the newly formed law system which is represented by Gerardo. The other symbols used in this are. http://www.answers.com/topic/death-and-the-maiden-play-4 ?? ?? ?? ?? ...read more.