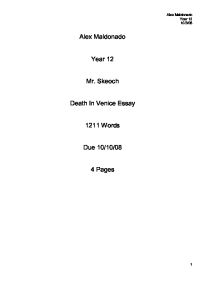 Alex Maldonado Year 12 Mr. Skeoch Death In Venice Essay 1211 Words Due 10/10/08 4 Pages What lead to the passing of Gustav von Aschenbach; his psychological expiry, or his physical demise? The novella, Death In Venice, is about the psychological death of the protagonist Gustav von Aschenbach. Aschenbach's death was a psychological one. He ultimately died from cholera, which was used only to clarify the fact that his life had come to an end and he could not control what was going to happen to him in his near future. His psychological decay commenced at the beginning of the novella when he first made contact with the snub nosed man by the grave stone yard in his home town. This man symbolizes the dead and rotting corpse. The wrinkly face and hands offer clues to what Aschenbach will turn into by the end of this novella. This first encounter foreshadows Aschenbach's future relationships with the other characters in the book as well. He always keeps a distance from the people he meets, keeping close to them but allowing enough room for them not to notice he is watching in them. ...read more.

Later on in the novel Aschenbach transforms himself, dying his hair and fixing his complexion just like the man on the boat. He follows the example of the posing man on the boat to Venice by wearing scarlet colors and hats with multi-colored ribbons. "Where upon the eloquent tempter washed his hair... and his hair was as black as when he had been young.... he passed from one procedure to the other... reclining comfortably ... saw his eyebrows arched more clearly and evenly, the shape of his eyes lengthened, their lightness enhanced..." Not long after Aschenbach disembarked from the boat, a gondolier picks him up in a shiny black gondola. The black color compares to the darkness of a coffin, which represents his trip to a certain death. The gondolier, who is a criminal, doesn't take Aschenbach to where he wants to go. This can be interpreted as a trip gone wrong. This trip gone wrong represents the trip that Aschenbach thought was going to rejuvenate him which in the end ends up corrupting and killing him. Additionally Aschenbach surrenders to the gondolier's will, a harbinger to his death. ...read more.

It doesn't take him long to find out that the city was poisoned, but instead of leaving and trying to save his own life he decides to stay and obsess over the young boy. Soon enough Aschenbach's life becomes the boy's. When Aschenbach hears the youth will be leaving Venice later on the day he finds out he becomes anxious to see him all he can. Not long after Tadzio and his family leave the rotten city, Aschenbach dies on his bed in his hotel room. In conclusion, Gustav von Aschenbach's death was mainly psychological. A long time before he physically dies he turns into everything he despises and believes to be wrong. He dies a slave to his passions, degraded, and stripped of all his dignity. He turns from a noble gentleman to a soul desperate for affection, a dark soul who lurks through time as though nothing else mattered anymore. Aschenbach forgets how to live. He becomes a man oppressed by his emotions and loses all ability to reason with himself. The book barely even mentions his physical death, it merely states that he died late in the afternoon after Tadzio had left the city. His psychological decay was inevitable and uncontrollable. ?? ?? ?? ?? Alex Maldonado Year 12 10/3/08 Alex Maldonado Year 12 10/3/08 2 1 ...read more.