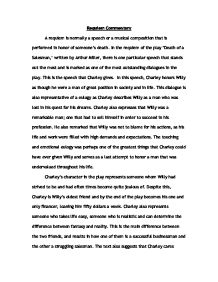 Death of a Salesman Commentary

Requiem Commentary A requiem is normally a speech or a musical composition that is performed in honor of someone's death. In the requiem of the play 'Death of a Salesman,' written by Arthur Miller, there is one particular speech that stands out the most and is marked as one of the most outstanding dialogues in the play. This is the speech that Charley gives. In this speech, Charley honors Willy as though he were a man of great position in society and in life. This dialogue is also representative of a eulogy as Charley describes Willy as a man who was lost in his quest for his dreams. Charley also expresses that Willy was a remarkable man; one that had to sell himself in order to succeed in his profession. He also remarked that Willy was not to blame for his actions, as his life and work were filled with high demands and expectations. The touching and emotional eulogy was perhaps one of the greatest things that Charley could have ever given Willy and serves as a last attempt to honor a man that was undervalued throughout his life. ...read more.

During Charley's speech in the requiem, the text suggests that Charley valued Willy's worth as a human being. The dialogue appears to be a semi-eulogy that is filled with much compassion and understanding of the struggle that his friend has encompassed in his lifetime. "Nobody dast blame this man... For a salesman, there is no rock bottom to the life. He don't put a bolt to a nut, he don't tell you the law or give you medicine. He's a man way out there in the blue, riding on a smile and a shoeshine. And when they start not smiling back-that's an earthquake. And then you get yourself a couple of spots on your hat, and you're finished. Nobody dast blame this man. A salesman is got to dream, boy. It comes with the territory." (101). From this extract, Charley actually romanticizes Willy's life and makes it sound as if it were one that was full of excitement, passion and adventure. This lasting tribute is one that signifies the respect that Charley has for his friend. ...read more.

The requiem is symbolic of the gift of friendship, from Charley to Willy. Were it not for Charley's attendance, the whole funeral would have been insignificant due to the fact that no one else was there except Willy's family. Charley's importance in the play indicates Willy's meaning and value as a human being that once strived for something he could never achieve. In the process of doing so, he has forgotten the most important values and morals in life. This is where Charley pities his friend, but he does so with respect. In the requiem, Charley regards Willy as thought he were a truly great person. The requiem of the play is filled with sad emotions that show the sense of loss that Willy's family and friends feel. Charley, a vital character to this part of the play, wraps up Willy's legacy and admits that he was a hard worker that often deserved more than what he bargained for. The eulogy that Charley gives is unanticipated yet; it shows the compassion and care that he had for Willy, a lasting friendship that no one else offered. ...read more.