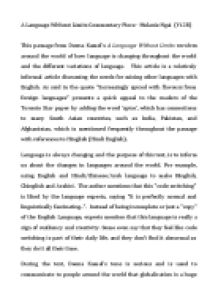 ﻿A Language Without Limits Commentary Piece - Melanie Ngai (Y12R) This passage from Deena Kamel?s A Language Without Limits revolves around the world of how language is changing throughout the world and the different variations of language. This article is a relatively informal article discussing the needs for mixing other languages with English. As said in the quote ?Increasingly spiced with flavours from foreign languages? presents a quick appeal to the readers of the Toronto Star paper by adding the word ?spice?, which has connections to many South Asian countries, such as India, Pakistan, and Afghanistan, which is mentioned frequently throughout the passage with references to Hinglish (Hindi English). Language is always changing and the purpose of this text, is to inform us about the changes in languages around the world. ...read more.

During the text, Deena Kamel?s tone is serious and is used to communicate to people around the world that globalization is a huge cause for the variations of English. Globalization seems to be the main fact that is affecting the change for the English language, helping with the Social Networks that making it easier to share this language variation; 'Hinglish, a lively hybrid spread quickly by the Internet and satellite channels, is the language of globalization'. This quote says that Hinglish is becoming really popular over the internet and on the media, and it is the language that is becoming globalized. As we move down the text, we can see that there is a massive question that the writer is trying to make us think about, and the question is do people from other countries or other countries learn English and make it as their first language? ...read more.

The author refers of English as a sponge language, because since it has been written around the year 700, it has adapted words from languages such as Norse, French, Latin, among others. Jack Chambers (professor of sociolinguistics at the University of Toronto) mentioned that English is an amazingly tolerant Language, because it has traveled all around the world and having been mixed-up with so many cultures and influences. In my opinion, I think that Deena Kamel has an interesting view of language change, as she thinks that people have been creative and also have been modifying the English Language in a good way. I believe what the text mainly proposes, is about the common misconception of the varieties of English as "worse" than the "common" one. They are just another type of English, that's all. ...read more.