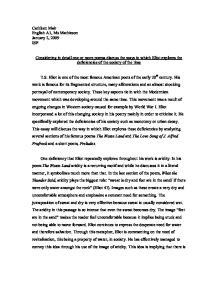 Cathleen Mair English A1, Ms Mathieson January 2, 2009 ISF Considering in detail one or more poems discuss the ways in which Eliot explores the deficiencies of the society of the time T.S. Eliot is one of the most famous American poets of the early 20th century. His work is famous for its fragmented structure, many alliterations and an almost shocking portrayal of contemporary society. These key aspects tie in with the Modernism movement which was developing around the same time. This movement was a result of ongoing changes in Western society caused for example by World War I. Eliot incorporated a lot of this changing society in his poetry mainly in order to criticize it. He specifically explored the deficiencies of his society such as monotony or urban decay. This essay will discuss the way in which Eliot explores these deficiencies by analyzing several sections of his famous poems The Waste Land and The Love Song of J. Alfred Prufrock and a short poem, Preludes. One deficiency that Eliot repeatedly explores throughout his work is aridity. In his poem The Waste Land aridity is a recurring motif and while he discusses it in a literal manner, it symbolizes much more than that. ...read more.

The chaos created by World War I along with changes has led to an immoral, decaying and ugly society. Other than the decay of society, Eliot also comments on the monotony of it. In his poem Preludes he creates this idea of monotony by not differentiating between individuals and repeating the same actions. One image which conveys this idea is "one thinks of all the hands that are raising dingy shades in a thousand furnished rooms" (Eliot 13). This image does not allow for individuality but instead is monotonous and all the same. "A thousand furnished rooms" along with "all the hands" imply that all the rooms and the people who live there are the same. They go through the same monotonous, daily routines without having any real purpose or significance in their lives. Eliot's choice of diction in terms of words such as "dingy" and "furnished" also emphasize that not only is society monotonous, it is also ugly and cheap. Eliot's view of his society is very critical and negative. He could also be saying that society does not allow for individuals to develop but instead forces people to conform. In addition to the monotone character of society, Eliot also explores its immorality, specifically in the form of lust. ...read more.

He seems to imply that society does not allow for the development of individual character but instead forces everyone to conform to a particular image. Anyone not fitting this ideal image is looked down upon as happens to Prufrock in this poem. Eliot is obviously very critical of this aspect of society and possibly even implies that this superficiality prevents society from succeeding. In conclusion, Eliot's representation of society is fairly bleak and doesn't leave much room for positive aspects. Through his exploration of society, he seems to imply there are only deficiencies and problems. In all three discussed poems, The Love Song of J. Alfred Prufrock, Preludes, and The Waste Land, he repeatedly criticizes society and focuses on everything that is lacking. One could say that his poetry has a very bleak outlook as if the world is nothing but misery and despair. However, despite the dominantly negative attitude, Eliot does offer a certain degree of hope for a brighter future. There is a sense of awareness in his poems meaning that the persona is usually aware to a certain extent of society's deficiencies which in turn implies the possibility of change. Nonetheless, Eliot's strongly dominant message is that the society of his time is far from perfect and suffers from countless deficiencies. Source Cited: Eliot, T.S. The Waste Land and other poems. New American Library: New York, 1998. ...read more.