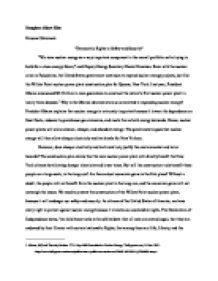 Democratic Rights to Safety and Security Arguing Against the Building of Nuclear Power Plants in the USA.

Tamplin. Poisoned Power: The Case Against Nuclear Power Plants Before and After Three Mile Island. Chapter 7: Nuclear Electricity and The Citizen's Rights. Emmaus, Pa: Rodale, 1971. <www.ratical.com/radiation/CNR/PP/chp7.html>. 3. "The Fatal Flaws of Nuclear Power." Public Citizen. Apr. 2006. Web. <http://www.citizen.org/documents/FatalFlawsSummary.pdf>. 4. "Radiation | Greenpeace International." Inspiring Action for a Green and Peaceful Future | Greenpeace USA. Greenpeace International, 5 Oct. 2006. Web. <http://www.greenpeace.org/international/en/campaigns/nuclear/safety/radiation/>. nuclear explosion also causes indirect long-term health risks because environmental pollution affects the food chain and agricultural production. Therefore, we need to prevent the Willets Point construction at all costs, especially because of its site location. Willets Point is in Queens, which is less than 8 miles away from New York City. New York City is a high risk target for terror attacks, because it is the nation's cultural and financial icon. As mentioned above, an explosion at the Indian Point nuclear plant could lead to severe damage costs. Since Indian Point is 24 miles from of New York City, an attack at Willets Point will comparatively lead to an even greater damage to the city. It is also extremely dangerous to build a nuclear power plant near City Field, which has a maximum capacity of 45,000 people. ...read more.

They have succeed in re-negotiating safety measures for constructed plant sites and in preventing the construction of the power plants in the first place. We will defend our democratic rights by campaigning to prevent the construction of the nuclear plant until the proposed plan is foiled. The current crisis at Fukushima following the devastating earthquake and tsunami has been top global news. Thousands of Japanese citizens have lost their lives and families members from the earthquake and tsunami damages. Thousands more are suffering from hunger and physical damages. However, the Japanese are currently most troubled by the fear of a potential nuclear explosion. Fifty workers at the Fukushima nuclear plant are currently sacrificing their lives to help mitigate the crisis. The Japanese Prime Minister have confessed that the nuclear plants have caused the hardest hardship since the World War II. In this global world, the least we can do is to have increased caution for nuclear energy by seeking anti-nuclear means. Constructing more nuclear plants at home while providing relief efforts for Japan seems paradoxical. Expanding national nuclear projects while guaranteeing democratic rights to security and safety is extremely contradictory. Willets Point nuclear plant construction must be prevented. ____________________ 5. "The Palisades Protest: A Pattern of Citizen Intervention" Bulletin of the Atomic Scientists, 27, 9, 53-36, Nov 1971. ...read more.