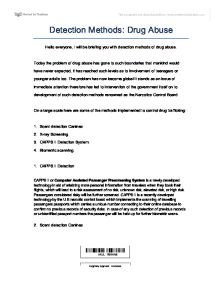 Hello everyone, I will be briefing you with detection methods of drug abuse. Today the problem of drug abuse has gone to such boundaries that mankind would have never expected, it has reached such levels as to involvement of teenagers or younger adults too. The problem has now become global it stands as an issue of immediate attention therefore has led to intervention of the government itself on to development of such detection methods renowned as the Narcotics Control Board . On a large scale here are some of the methods implemented to control drug trafficking: 1. Scent detection Canines 2. X-ray Screening. 3. CAPPS II Detection System. 4. Biometric scanning. 1. CAPPS II Detection CAPPS II or Computer Assisted Passenger Prescreening System is a newly developed technology in aid of attaining more personal information from travelers when they book their flights, which will lead to a risk assessment of no risk, unknown risk, elevated risk, or high risk. Passengers considered risky will be further screened. ...read more.

This is also considered amongst most accurate methods after the scent detection Canines but does have flaws as lead shielding or polyvinyl could conceal the bombs (drugs). 4. Biometric Scan This is a technology which is yet to be implemented but has gone sufficient testing and is said to be precise but could lead to misinterpretations. Biometric scans are basically a united name for technological use of retina, fingerprint and facial pattern scans. A 64MA CCTV camera equipped with retina analyzer and temperature sensor is fixed in the scanning area. The camera records the body temperature, sweat fluid level and facial patterns of the traveler rapidly as he goes through passport verification and produces instant report that is viewed by the official. Any such rapid change in facial pattern and increased sweating would be reported. Constantly the retina analyzer with the aid of a 10PX Camera auto aligns to the travelers retina and checks for verification from database also informs the official if any dilution or blood shot eyes are noticed since drug consumers usually show such symptoms after immediate consumption .If any such traveler does not pass the test he is held up by the officials for further tests. ...read more.

Depending on the test, up to 8 different drugs could be detected. This method is the best method for determining recent use and is a potential indicator of impairment. 3. Spray(Sweat ) Drug Testing Spray (sweat) drug test are non-invasive. It is very easy to collect the specimen .The detection window is long and usually can detect drug use up to a couple of weeks. These drug tests are relatively tamper proof since they are hard to manipulate... This method is however also has chances of inaccuracy since there are chances of high level of contamination from external sources since it is sweat that's been tested for drug traces. 4. Hair Drug Testing Hair drug testing can provide a much longer window of detection hair samples from anypart of the body such as facial hair, the underarms, arms, and legs can be taken into testing of drug traces. This method has proved to be highly accurate since there is no known way to adulterate a hair specimen in order to falsify the results of the test but is considerably much more expensive than the other methods. ?? ?? ?? ?? Detection Methods: Drug Abuse ...read more.