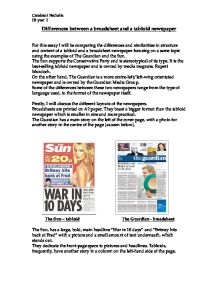 Differences between tabloids and newspapers

Differences between a broadsheet and a tabloid newspaper For this essay I will be comparing the differences and similarities in structure and content of a tabloid and a broadsheet newspaper focusing on a same topic using the examples of The Guardian and the Sun. The Sun supports the Conservative Party and is stereotypical of its type. It is the best-selling tabloid newspaper and is owned by media magnate, Rupert Murdoch. On the other hand, The Guardian is a more centre-left/left-wing orientated newspaper and is owned by the Guardian Media Group. Some of the differences between these two newspapers range from the type of language used, to the format of the newspaper itself. Firstly, I will discuss the different layouts of the newspapers. Broadsheets are printed on A2 paper. They boast a bigger format than the tabloid newspaper which is smaller in size and more practical. The Guardian has a main story on the left of the cover page, with a photo for another story in the centre of the page (as seen below). The Sun - tabloid The Guardian - broadsheet The Sun, has a large, bold, main headline "War in 10 days" and "Britney hits back at Fred" with a picture and a small amount of text underneath, which stands out. ...read more.

Most sentences, are hyperbolic (over the top) for effect, informal (characterized by short sentences, use of colloquialisms and slang), sentences are short and snappy and adjectives often carry sexual connotations "Beckham has it working on below". They make frequent uses of elision e.g. don't, won't which is another informal technique they employ to address the reader directly. On the other hand, the Guardian's language is more sophisticated and formal. The sentences are complex; no slang is employed and is written in Standard English. Commonly, metaphors are favored to puns although some can be found but they are more subtle than in The Sun. Unlike the Sun, The Guardian describes people by focusing, not on their appearance; but on their personality or on their position in the society. Commentaries of the journalist are included as well as statistics and politician's comments. This also shows that the broadsheet uses more relevant social issues like the stock market or the trade union. "The Guardian has not used any kinds of slang and uses Standard English". The tabloid newspapers humor tends to go through in the way of puns. The content of a tabloid paper is also a lot different to a broadsheet paper because all of the people featured in the ...read more.

'Three guilty of liquid bomb terror plot' this is in bold and in large font and is the first thing along with the large image that catches the readers attention. Below the main heading on the left side of the page is the article itself, it is quite long compared to the Sun's. Due to its large area because the newspaper is a broadsheet it does not affect the main headline or the front page if they do place the normal regulars of broadsheets on the front page. On the whole I think the layout of The Guardian and the techniques used to catch the readers are much better than the Sun as the colours used for the background and the text catches the reader's eye. However the photograph in broadsheet does lack in realism compared to the tabloid. But at the end of the day both newspapers are able to attract the reader in their own way and its own target audience, but broadsheets being more informative compared to tabloids will always have my attention as they are able to provide a wide range of articles because of the large format of the paper. The Guardian The Sun ?? ?? ?? ?? Cambieri Nathalie IB year 2 ...read more.