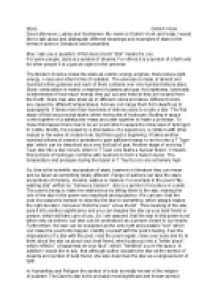 ﻿Stars Oldrich Vlcek Good afternoon, Ladies and Gentlemen. My name is Oldrich Vlcek and today I would like to talk about and distinguish different meanings and examples of stars in the terms of science, literature and humanities. May I ask you a question. What does a term "star" means for you. For some people, stars is a symbol of dreams. For others it is a symbol of a faith and for other people it is a just an object in the universe. The Modern Science views the stars as cosmic energy engines, that produce light, energy, x-rays and other forms of radiation. The universe is made of almost one hundred billion galaxies and each of them contains over one hundred billions stars. Stars' composition is mainly comprised of plasma and gas. Its brightness, luminosity is determined of how much energy they put out and how far they are located from the Earth. Stars may also show up in different colors and sizes. Different colors are caused by different temperatures. And we can range them from dwarfs up to supergiants. It takes more than hundreds of billions years to create a star. ...read more.

Range of authors can take the stars as symbols of mystery, dreams, wishes or desires. For example in the poem "My wishing star" written by "Sameera Sameer", star is a symbol of a believe in a wish. The poet is trying to make her wishes true by telling them to the star, making the role of the star in the poem very important and subjective. We can see, that the poet increases the tension to describe the star to something, which always makes the right decision, moreover finds the poet " a true friend". This meaning of the star, puts it into another significance and you can imagine the star as your best friend or person, which will take care of you. So I am assured, that the star in this poem is not taken only as believe, but also can be understood as a person closed to our hearts. Furthermore, the star can be explained as the only right and possible "tool" which can make the poet's life happier. Identify yourself with the poet's feeling. ...read more.

At this time, the David's star becomes very popular among the jewish community and is taken as architectural decoration. It became a symbol of pride and jews usually used it for showing their origins, culture and unity. However the David's star in the time of the Second World War, where Hitler force the jews to wear yellow David's star, it did not represent a pride anymore. It represented a "badge of shame". But after the end of the Second World War, the David's star gained an even bigger popularity among the jews than before the Second World War and it became a symbol of a memory to the victims of the Holoucaust, which never should been forgotten. In conclusion I would like to say that a star is very important symbol, not only in science, but also in humanities and literature. This cosmic energy engine, thanks to which we can live on this planet has a representation in many historical events, cultures and literature pieces, symbolizing dreams, wishes, faith or a protection. I hope you took out some interesting fact gained some new useful knowledge. Thank you everyone for your attention. ...read more.