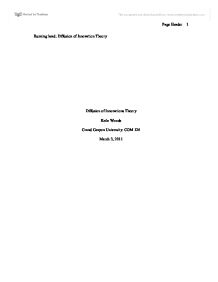 Diffusion of Innovations Theory We live in a society where we feel the need to outdo one another the need to be the first to develop something new because of our competitive nature. In this day and time it is easy to forget the early innovato

Running head: Diffusion of Innovation Theory Diffusion of Innovations Theory Keila Woods Grand Canyon University: COM 126 March 3, 2011 Diffusion of Innovations Theory We live in a society where we feel the need to outdo one another the need to be the first to develop something new because of our competitive nature. In this day and time it is easy to forget the early innovators who set the standards for many new appliances. Everett Rogers defines diffusion as the process by which an innovation is communicated through certain channels over time among the members of a social system (Everett Rogers 1995). The microwave has been around for many years it changed the way people prepared TV dinners, but it was not developed for this purpose it started out as a radar device. ...read more.

Americans ranked the microwave as No. 1 technology that makes their lives easier. In many households the microwave has replaced the conventional oven. When a new product first come out the consumers that are more technologically incline will most likely purchase the new device they are willing to pay the outrageous prices in order to be the first to tackle some new technology, and for those of us who do not have any technical skills we will follow the innovators because we believe they understand more. New products come out every year and they are usually adopted by a small group of people who feel they understand the product which we know as the innovators and then we come to the early adopters they make or break a new product. ...read more.

I am what you would identify as a late majority, I will wait until it goes on sell and when I do decide to purchase a new product they are coming out with a new version of what I just bought. New technology is evolving at a high rate and we want to evolve with it. You have to learn and create what makes the consumer happy. The microwave has been around for a long time and with the increasing growth of the internet and the telecommunications networks, and do not forget the good old fashioned word of mouth, it will continue to make its appearance in the majority of the households in America. Reference Brief History of the Microwavehttp://www.smecc.org/microwave_oven.htm Module 2 Reading Diffusion of Innovations http://angel03.gcu.edu/section/default.asp?id=678691 Rogers, E. M. (1995). Diffusion of innovations (4th ed.). New York: Free Press. ?? ?? ?? ?? 1 Page Header ...read more.