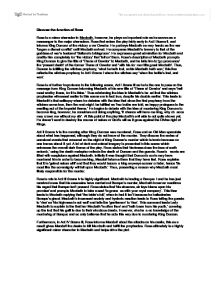 Discuss the Function of Ross in Macbeth

Discuss the function of Ross Ross is a minor character in Macbeth, however, he plays an important role as he serves as a messenger to the major characters. Ross first enters the play fairly early in Act I Scene ii, and informs King Duncan of the victory over Cawdor. He portrays Macbeth as very heroic as the war 'began a dismal conflict' until Macbeth arrived. He compares Macbeth's bravery to that of the goddess of war's husband 'Bellona's bridegroom'. He expresses great admiration for Macbeth and credits him completely for 'the victory' that 'fell on' them. Ross's description of Macbeth prompts King Duncan to give the title of 'Thane of Cawdor' to Macbeth, and he tells him to 'go pronounce' the 'present death' of the former Thane of Cawdor and 'with his former title greet Macbeth'. ...read more.

He begins to debate with the idea of murdering King Duncan to become king, however, he considers not doing anything, 'if chance will have me king, why chance may crown me without my stir'. At this point of the play Macbeth's evil side is not quite shown yet. He doesn't want to destroy the course of nature or God's will as it goes against the Divine right of Kings. Act II Scene iv is the morning after King Duncan was murdered, Ross and an Old Man speculate about what has happened, although they do not know of the murder. They discuss the series of unnatural events that occurred on the night of King Duncan's murder which is ironic because no one knows about it yet. A lot of dark and animal imagery is presented in this scene which enhances the overall dark theme of the play. ...read more.

This then leads to Macbeth replying that 'the table's full,' when in fact it isn't because he hallucinates Banquo's ghost. Macbeth's increased anxiety and hysteric reaction leads to Ross telling the guests to 'rise' as 'his highness is not well' and tells the 'gentlemen' to 'rise'. This comment leads Lady Macbeth to explain to the that her Macbeth 'is often thus' and 'hath been from his youth,' covering up the fact that his guilt is due to their atrocious deeds. However, she has no knowledge of the murdering of Banquo and so only believes that he acts this way due to murdering King Duncan. Furthermore, in Act IV Scene iii, Ross informs Macduff about the attacks on his castle, this as a result gives Macduff the desire to kill Macbeth and fulfill the prophecies. Ross ultimately is a highly significant minor character in Macbeth and helps drive the plot. ...read more.