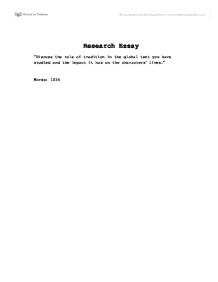 Research Essay "Discuss the role of tradition in the global text you have studied and the impact it has on the characters' lives." Words: 1035 Like Water for Chocolate is Laura Esquivel's first novel, first published in 1989, and became a bestseller in the author's native Mexico. Esquivel uses a creative way of bringing in monthly recipes to tell the story, just like Amy Coffin said "Throughout the book, the food is described in such detail, that I could taste every flavor". The story is about a girl, named Tita, whose life connects closely to the kitchen when she's young. Her love has been forbidden by her wicked mother, which makes her life miserable. The novel's imaginative mix of recipes, home remedies, and love story set in Mexico in the early part of the century induce readers to think about the insane tradition that causes bad things. In this story, tradition is the main cause of everything, starts from Mama Elena. ...read more.

Esquivel's comment about Mama at one point in the narrative is: "Unquestionably, when it came to dividing, dismantling, dismembering, desolating, detaching, dispossessing, destroying or dominating, Mama Elena was a pro". That's true. Conflict really starts when Pedro agrees to marry Rosaura, the second daughter. Pedro just thinks of being near Tita everyday but doesn't think of the later consequences that he makes a such stupid decision. Tita absolutely can run away with Pedro but if she turns her back on this tradition, she will not fulfill what society considers her responsibility to her mother and Pedro doesn't agree anyway. Then, Pedro always tries to be near Tita, that breaks the happiness of both his marriage and Tita's family and somehow makes Rosaura realize the truth that: "The hardest thing to do is watch the one you love, love someone else". It is not a strange behaviour that Rosaura feels jealous when Pedro is with another woman, especially her sister. ...read more.

She has to turn down Dr.Brown's proposal, the one who cares for her, loves her. Then she has to stand Pedro's death right besides her and she kills herself ater that. This prove that Byron was right: "Die for the one you love is easier than live with the one who loves you". Magic realism is also an important part in this book. For example the wedding cake that Tita makes, it has her tears in the ingredients. After eating the cake, everyone is crying and even vomiting. The box of match is also an important part in the book. It presents the soul in a person. Or the soup that Tita eats, which makes her back to her sense. The tears that she cries (too much that becomes a river) when she eats the soup shows that she has been hiding her feelings for a long time. In conclusion, the tradition in this story is very important, it affects characters' lives. Especially, it leads to the death of Nacha, Tita, Pedro, Roberto, Rosaura, Mama Elena, Jose, Juan. Poor Tita has to live a miserable life on the ranch for all her life. . ...read more.