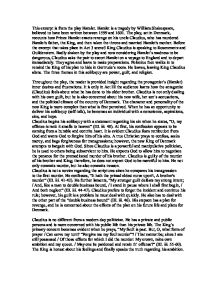 This excerpt is from the play Hamlet. Hamlet is a tragedy by William Shakespeare, believed to have been written between 1599 and 1601. The play, set in Denmark, recounts how Prince Hamlet exacts revenge on his uncle Claudius, who has murdered Hamlet's father, the King, and then taken the throne and married Hamlet's mother. Before the excerpt that takes place in Act 3 scene3 King Claudius is speaking to Rosencrantz and Guildenstern. Badly shaken by the play and now considering Hamlet's madness to be dangerous, Claudius asks the pair to escort Hamlet on a voyage to England and to depart immediately. They agree and leave to make preparations. Polonius then walks in to remind the King of his plan to hide in Gertrude's room. He leaves, leaving King Claudius alone. The three themes in this soliloquy are power, guilt, and religion. Throughout the play, the reader is provided insight regarding the protagonist's (Hamlet) inner desires and frustrations. It is only in Act III the audience learns how the antagonist (Claudius) ...read more.

iii. 44-47). Claudius prefers to forget the incident and continue his rule; however, his guilt is a problem he must deal with quickly. He also has to deal with the other part of the "double business bound" (III. iii. 46). His stepson has a plan for revenge, and he is concerned about the effects of the plan on his future life and plans for Denmark. Claudius is no different from a modern day politician. He has a private and public persona and is more concerned with his public life than his private life. The King's primary concern becomes evident when he prays, "My fault is past. But, O, what form of prayer / Can serve my turn? "Forgive me my foul murder"? / That cannot be; since I am still possessed / Of those effects for which I did the murder: My crown, mine own ambition and my queen. / May one be pardoned and retain th' offense?" (III. iii. 55-60). The King is honest about his feelings and finally speaks the truth regarding his ambition. ...read more.

It would not be inconceivable for Claudius to want his own son to be heir to the throne of Denmark. However, this is only a dream, and it is ironic that Claudius dies by the same sword that kills Laertes and Hamlet. Moreover, he wants to repent but cannot bring himself to beg for forgiveness. Claudius' conduct is not unusual since most murderers do not regret their crime until they are caught and prosecuted. The powerful King finally abandons all his pride and begs, "O limed soul, that, struggling to be free, / Art more engaged! Help, angels! Make assay! / Bow, stubborn knees; and, heart with strings of steel, / Be soft as sinews of the newborn babe!" (III. iii. 72-75). Claudius strives to find the right words for his petition to God. He makes a final plea to the angels for his heart to be made contrite and pure. The King has hope his prayers will be answered when he reminds himself, "All may be well" (III. iii. 76). Claudius' one "great virtue is that he never gives up and shows extraordinary resourcefulness in the most appalling situations that would break lesser men" (Gilbert 231). ...read more.