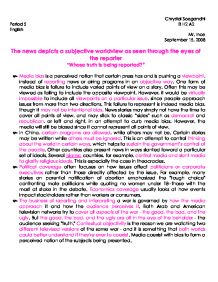 Chrystal Soegandhi Period 5 IB H2 A2 English Mr. Ince September 15, 2008 The news depicts a subjective worldview as seen through the eyes of the reporter "Whose truth is being reported?" * Media bias is a perceived notion that certain press has and is pushing a viewpoint, instead of reporting news or airing programs in an objective way. One form of media bias is failure to include varied points of view on a story. Often this may be viewed as failing to include the opposite viewpoint. ...read more.

However, the media will still be biased since it cannot represent all points of view. * In China, certain programs are allowed, while others may not be. Certain stories may be written while others must be ignored. This is an attempt to control thinking about the world in certain ways, which helps to sustain the government's control of the people. Other countries also present news in ways slanted toward a particular set of ideals. Several Islamic countries, for example, control media and slant media to glorify religious ideals. ...read more.

* The business of reporting and interpreting a war is governed by how the media approach it and how the audience perceives it. Both Arab and American television networks try to cover all aspects of the war - the good, the bad, and the ugly. But the good, the bad, and the ugly are all in the eye of the beholder - the audience seeking "truth." Contextual objectivity is the reason we are watching two different televised versions of the same war - and it is something that both worlds could better understand if they're ever to coexist. Media coexist with bias to form a perceived notion of the subjects being presented. ...read more.