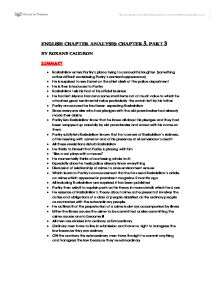 ENGLISH CHAPTER ANALYSIS: CHAPTER 5, PART 3 BY ROXANE CAUDRON SUMMARY * Raskolnikov enters Porfiry's place trying to conceal his laughter (something rather difficult considering Porfiry's comical appearance) * He is surprised to see Zametov the chief clerk of the police department * He is then introduced to Porfiry * Raskolnikov tells his host of his official business * He had left Alyona Ivanovna some small items not of much value to which he attached great sentimental value particularly the watch left by his father * Porfiry announced he had been expecting Raskolnikov * Since everyone else who had pledges with the old pawnbroker had already made their claims * Porfiry lets Raskolnikov know that he knew all about his pledges and they had been wrapped up carefully by old pawnbroker and dated with his name on them * Porfiry subtly lets Raskolnikov knows that he's aware of Raskolnikov's sickness, of his meeting with zametov and of his presence at Marmeladov's death * All these revelations disturb Raskolnikov * He thinks to himself that Porfiry is playing with him * "like a cat plays with a mouse" * He momentarily thinks of confessing whole truth * Especially since he feels police already know everything * Discussion of relationship of crime to ones environment ensues * Which leads to Porfiry's announcement that he has read Raskolnikov's article on crime which appeared in prominent magazine 2 months ago * All including Raskolnikov are surprised it has been published * Porfiry then asks R ...read more.

* Even thought Ras disclaims his pretention to being extraordinary man, nevertheless what is new and original in his theory is that he "sanctions bloodshed in the name of conscience" * That is the great man is obligated to give to the world his new word and if it means killing a person in order to do so then the great man must do that * P is also very clever when he asks R in a casual manner if he by any chance saw two painters * This is a trap and Ras knows it because there were no painters when he found watch but there were when she was murdered * Ras is clever enough to discover the trap and thus escape his perception of trap shows return of rational powers consequently P is, as Ras thought, "playing cat and mouse" games * If there seen to be contradiction in parts of Ras theory such as maintaining that the great will suffer and also later that the great must be above sympathy and dependence these contradictions are intentional on Dostoevskys part * Instead it has to be un-pr�cised that Raskolnikov at the time of the murder had not worked out his theory in complete detail though contradictions exist so that later Ras will have to justify them when he is trying to explain his crime to Sonya. * So to put it more simply, Raskolnikov had to commit the murder before he had completely formulated the theory. ...read more.

* Raskolnikov for example, is amused and rather excited until he starts doubting himself and wondering whether the others are aware of what he's done. * His inner thoughts reflect the panic in his mind, he is outwardly seeming calm enough but in his mind he is panicking and cursing himself for acting the way he did: "WOMAN! Why did i say it like that!" * "Stupid! Clumsy! Why did i put that in?" * "Why did he say 'in HER apartment' like that?" * "Why are they using that tone?" * Raskolnikov in piling on tons of questions and he is on the verge of spitting out the entire truth to them because he feels he cannot restrain this madness any longer. * There is a lot of dialogue in this section and the rest is usually written as narrative (this is just like most of the book is written- lots of dialogue followed by narrative which helps us easily visualize the scene and what is going on.) * There is quite a lot of action described in this scene- specifically the movements of each character such as Razumhikin banging his fist on the table when frustrated by Raskolnikov's annoying laughter at the beginning of the chapter. * This contributes to the chaotic and tense tone and atmosphere created. * The language is more or less formal when narrative form is employed but it becomes slightly more colloquial and conversational when the men insult each other such as Raskolnikov calling his friend a "Swine". ...read more.