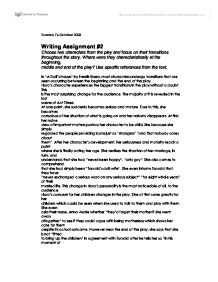 Tuesday 7th October 2008 Writing Assignment #2 Choose two characters from the play and focus on their transitions throughout the story. Where were they characteristically at the beginning, middle and end of the play? Use specific references from the text. In "A Doll's House" by Henrik Ibsen, most characters undergo transitions that are seen occurring between the beginning and the end of the play. Nora's character experiences the biggest transitions in the play without a doubt. This is the most surprising change for the audience. The majority of it is revealed in the last scene of Act Three. At one point, she suddenly becomes serious and mature. Due to this, she becomes conscious of her situation of what is going on and her naivety disappears. ...read more.

She at first cares greatly for her children which could be seen when she used to talk to them and play with them. She even asks their nurse, Anna-Marie whether "they'd forget their mother if she went away altogether" to see if they could cope with being motherless which shows her care for them despite its actual outcome. However near the end of the play, she says that she is not "fitted to bring up the children" in agreement with Torvald after he tells her so "in his moment of anger". Nora also enjoys keeping secrets from Torvald like when she eats macaroons and also her money loan for a vacation that saved his life. ...read more.

Rank's familiarity with the Helmer family is clearly seen in the play but this changes as it progresses. At the beginning, Torvald's reply to Nora's question confirms the statement before. He simply says that "there's no need to" invite Dr. Rank because "it's an understood thing that he dines with" the Helmers. Later on in the play, Dr. Rank seems distanced away from the Helmers when he starts calling Nora "Mrs. Helmer" after she feels offended by his sudden confession of love for her. His letter announcing that he is going to detach himself from them also shows his increasing isolation. Character transitions in the play "A Doll's House" are very important because they increase the suspense of the story because each character is able to provide the unexpected through transitions at different times. ...read more.