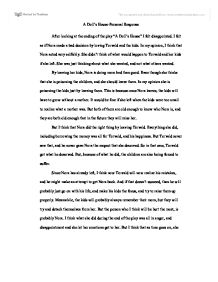 After looking at the ending of the play "A Doll's House" I felt disappointed. I felt as if Nora made a bad decision by loving Torvald and the kids. In my opinion, I think that Nora acted very selfishly. She didn't think of what would happen to Torvald and her kids if she left. She was just thinking about what she wanted, and not what others wanted. By leaving her kids, Nora is doing more bad than good. Even though she thinks that she is poisoning the children, and she should leave them. ...read more.

But I think that Nora did the right thing by leaving Torvald. Everything she did, including borrowing the money was all for Torvald, and his happiness. But Torvald never saw that, and he never gave Nora the respect that she deserved. So in that case, Torvald got what he deserved. But, because of what he did, the children are also being forced to suffer. Since Nora has already left, I think now Torvald will now realize his mistakes, and he might make an attempt to get Nora back. ...read more.

But I think that as time goes on, she will realize what a huge mistake she has made, but she won't be able to return to her family, because she has already separated herself from them. So in my opinion Nora's decision was very rash, and she wasn't thinking about how it might affect others when she made it. By separating herself from the family she is not only hurting Torvald, and the kids, but she is also hurting herself. It's like she is throwing her whole life away, to start a new one. But in reality that is not possible, she will always have to live with what she did. ?? ?? ?? ?? A Doll's House-Personal Response ...read more.