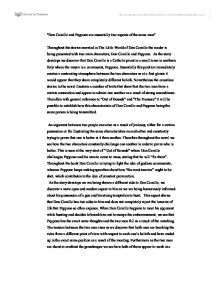 Throughout the stories narrated in The Little World of Don Camillo the reader is being presented with two main characters; Don Camillo and Peppone.  As the story develops we discover that Don Camillo is a Catholic priest in a small town in northern Italy where the mayor is a communist, Peppone. Essentially this position immediately creates a contrasting atmosphere between the two characters as at a first glance it would appear that they share completely different beliefs. Nevertheless the countless stories in the novel illustrate a number of traits that show that the two men have a certain connection and appear to admire one another as a result of strong resemblance.  Therefore with general reference to “Out of Bounds” and “The Treasure” it will be possible to establish how this characteristic of Don Camillo and Peppone being the same person is being transmitted.

An argument between two people can arise as a result of jealousy, either for a certain possession or for illustrating the same characteristics as each other and constantly trying to prove that one is better at it than another. Therefore throughout the novel we see how the two characters constantly challenge one another in order to prove who is better. This is seen at the very start of “ Out of Bounds” where Don Camillo challenges Peppone and his men to come to mass, stating that he will “fix them”. Throughout the book Don Camillo is trying to fight the idea of godless communists, whereas Peppone keeps making speeches about how “the reactionaries” ought to be shot, which contributes to the idea of constant provocation.

As the story develops we are being shown a different side to Don Camillo, we discover a more open and modern aspect to him as we are being humorously informed about his possession of a gun and his strong temptation to hunt.  This aspect shows that Don Camillo has two sides to him and does not completely reject the luxuries of life that Peppone so often exposes. When Don Camillo happens to meet his opponent while hunting and decides to knock him out to escape the embarrassment, we see that Peppone has the exact same thoughts and the two men fail as a result of the matching.

The tension between the two men rises as we discover that both men are breaking the rules from a different point of view with respect to each one’s beliefs and have ended up in the exact same position as a result of the meeting. Furthermore as the two men are about to confront the gamekeeper we see how both of them appear to work in a team to distract and knock him out, developing a similar idea about their escape without having to communicate. This shows that their general mentality towards life is related. Their adventure ends on an agreement where both men settle by blaming temptation and throw away their rabbits, but we see that the events that follow illustrate the similarities between the two men.  Don Camillo automatically punishes himself as a result of having sinned which coincides with his strong religious views. However, Peppone, who is portrayed as a determined communist appears to have a Christian conscience deep inside, which is seen as he decides to confess to sins, proving that the two men actually share the same beliefs.  Both of them develop very similar ideas throughout the entire novel which essentially leads to be the main cause of their conflicts and general anger towards one another. As Peppone confesses having returned to collect the rabbits, Don Camillo realizes that he cannot judge him, as he was tempted to act in the same way.

“Out of Bounds” portrays the type of relationship the two men have, constantly trying to appear as each other enemies, although the two men secretly admire each other, as seen when Peppone cooks Don Camillo a rabbit at the end of the story.

Throughout the story “The Treasure” the reader is being presented with yet another conflict that arises as a result of competition and jealousy. As Don Camillo discovers about Peppone’s plan to build the People’s Palace he becomes irritated as he had always dreamed of building his personal Recreation Center for children.  Essentially we can see that both men are eager to present a building with an exact same educational and recreational purpose, but the high level of competition between them doesn’t allow one of them to appear better in front of the public. Additionally we discover that the two men share a common interest in the well being of the town but try to approach it from two distinct manners. Although both men appear to achieve their goals by sometimes applying irrational methods such as threatening with weapons and stealing, their intentions are always honest.

In all, the conflicts that are represented in the stories between Peppone and Don Camillo prove to be the evidence of their correlation with one another as a great number of them are closely related to the jealousy that one feels towards his strongest competition, somebody that equally reflects him. It can be said that that the two men are essentially two aspects of the same man as they share similar beliefs and goals but have chosen to demonstrate these from different perspectives; a Christian point of view and a Communist ideology. Nevertheless the two men feel dependent on one another and respect one another as seen in the story “Return to the Fold”, where Don Camillo returns to his town as a result of Peppone’s reliance, after being sent off by the Bishop.