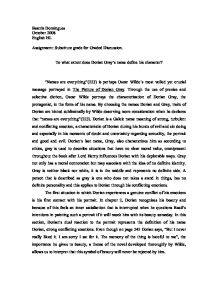 Beatriz Domingues October 2008 English HL Assignment: Substitute grade for Graded Discussion. To what extent does Dorian Gray's name define his character? "Names are everything"(223) is perhaps Oscar Wilde's most veiled yet crucial message portrayed in The Picture of Dorian Gray. Through the use of precise and selective diction, Oscar Wilde portrays the characterization of Dorian Gray, the protagonist, in the form of his name. By choosing the names Dorian and Gray, traits of Dorian are hinted subliminally by Wilde deserving more consideration when he declares that "names are everything"(223). Dorian is a Galeic name meaning of strong, turbulent and conflicting emotion, a characteristic of Dorian during his bursts of evil and sin doing and especially in his moments of doubt and uncertainty regarding sexuality, the portrait and good and evil. Dorian's last name, Gray, also characterizes him as according to ethics, gray is used to describe situations that have no clear moral value, omnipresent throughout the book after Lord Henry influences Dorian with his deplorable ways. Gray not only has a moral connotation but may associate with the idea of no definite identity. Gray is neither black nor white, it is in the middle and represents no definite side. A person that is described as gray is one who does not takes a stand in things, has no definite personality and this applies to Dorian through his conflicting emotions. ...read more.

Her eyelids were warm with his breath" describing a romantic encounter of Sybil and Dorian which proves his heterosexuality as he proposes to her. The last genuine emotions conflict of Dorian is one of morals regarding good, evil, pleasure and love. Dorian struggles with the fact that he loves Henry which he knows towards the end of the novel is a bad influence, a love that could be symbolized as a love for evil and sin. This uncontrollable love is seen on pages 93 and 94 of Chapter 6 in which he states, "Harry, you are dreadful! I don't know why I like you so much" and Lord Henry responds, "You will always like me, Dorian. I represent to you all the sins you have never had the courage to commit". Wilde makes Dorian's attraction to evil not explicit solely in this passage but also by Dorian's choice of Lord Henry, evil, over Basil, good. In these few sentences, Dorian's attraction to evil is made explicit and its application to his life evident in his homosexual love triangle. Although this attraction prevails, Dorian does have his moments of good as on page 109 of Chapter 8 when he mentions to Lord Henry, "I know what conscience is, to begin with. It is not what you told me it was. ...read more.

You have thrown it all away. You are shallow and stupid"(98). Dorian falls in love with Sybil's acting talent and not herself, he sees her as a trophy wanting "to place her on a pedestal of gold" for the "world to worship the woman who is mine [his]" (87). If Dorian were a man of morals and good-hearted principles he would never love at such a superficial level and have such shameful conduct especially with his remarks. If he truly loved Sybil he would want her independent of her acting and independent of what others thought of her. His shallowness is the true definition of gray. Authors recurrently search for techniques to develop either themes, plot, motifs, or characters in novels, attempting originality at their every choice. Oscar Wilde excels in developing subliminally the characterization of his protagonist, Dorian Gray, with the characters very own name. However, he does this characterization in a veiled manner and a reader will only attempt to analyze the character's name once he encounters Wilde's phrase that "names are everything"(223) in which he hints to the reader how much a name can say about a person. Wilde did not just name Dorian Gray for any reason, the reasoning can be discovered once the reader understands this technique of his and searches for the meaning of names. Dorian Gray is truly a man of conflicting emotions that lacks morals, as stated in his own name. This is perhaps one of Wilde's most genius connections, the work of a literature mastermind. ...read more.