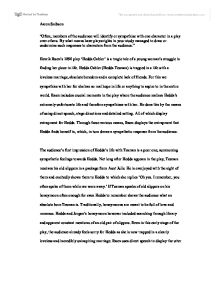 "Often, members of the audience will identify or sympathise with one character in a play over others. By what means have playwrights in your study managed to draw or undermine such responses to characters from the audience." Henrik Ibsen's 1890 play 'Hedda Gabler' is a tragic tale of a young woman's struggle in finding her place in life. Hedda Gabler (Hedda Tesman) is trapped in a life with a loveless marriage, absolute boredom and a complete lack of friends. For this we sympathise with her for she has no real hope in life or anything to aspire to in the entire world. Ibsen includes crucial moments in the play where the audience realises Hedda's extremely unfortunate life and therefore sympathises with her. He does this by the means of using direct speech, stage directions and detailed setting. All of which display entrapment for Hedda. Through these various means, Ibsen displays the entrapment that Hedda finds herself in, which, in turn draws a sympathetic response from the audience. The audience's first impression of Hedda's life with Tesman is a poor one, summoning sympathetic feelings towards Hedda. Not long after Hedda appears in the play, Tesman receives his old slippers in a package from Aunt Julle. ...read more.

Here, we can identify her situation of entrapment in her life, making it easy for the audience to be sympathetic towards her. When Hedda is sitting with Lovborg and Mrs. Elvsted, she wants Lovborg to have a glass of punch, which he blatantly refuses. She replies with 'so I, poor thing, have no power over you at all?' This direct speech is possibly ridiculing her ability to empower someone as she can not even persuade a man to drink a glass of punch. Her situation is ridiculous. No matter what in the world she does, she has no influence on anyone whatsoever. For this, the audience feels sorry for her as her desperation to have an influence on someone continues to be depleted to the extent where she cannot even get someone to have a drink. Clearly, direct speech is an effective way to reach the hearts of an audience. The setting used by Ibsen largely contributes to the audiences understanding of Hedda's unquestionable hopelessness and entrapment. In the beginning of Act 3, before any dialogue, a description of a rather sinister setting is given. The 'curtains across the middle doorway are closed' as are the curtains in front of the glass door. ...read more.

All she ever wanted was to be free which meant that she 'could even live at last. It is sad and incredibly ironic to the audience to think that committing suicide is the only way to achieve this. This short, simple yet important stage direction reveals Hedda's utter desperation for freedom and how she is willing to do anything to achieve it, compelling the audience to sympathise with her It can be seen that Ibsen uses direct speech, detailed settings and stage directions in such a way that it compels the audience to sympathise with Hedda. Direct speech shows primarily the entrapment she so obviously feels and it unmistakably illustrates her complete lack of power, which she despises. It also shows the complete boredom she feels when around Tesman, who pays no attention to what she really wants. The setting description displays her entrapment using symbols of fading hope. The stage direction ultimately shows her sheer desperation to escape this deadly entrapment and how she will do anything to become free. Henrik Ibsen has used all of these elements to successfully draw out a sympathetic response from the audience towards Hedda Gabler. ?? ?? ?? ?? Aaron Snibson ...read more.