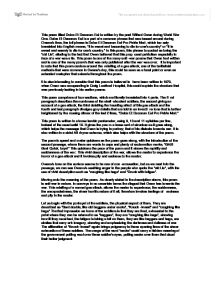 This poem titled Dulce Et Decorum Est is written by the poet Wilfred Owen during World War One. Dulce Et Decorum Est is a part of a common phrase that was tossed around during Owens's time, the full phrase is Dulce Et Decorum Est Pro Patria Mori, which loosely translated into English means, "It is sweet and becoming to die for one's country" or "It is sweet and seemly to die for one's country." In this poem, this phrase to quoted as being the "old Lie"; alluding to the fact that Owen believed that this proposed patriotism especially in face of a war was a lie. This poem is one of the many anti-war poems that Owen had written and is one of the many poem's that was only published after the war was over. It is important to note that this poem centers around the retelling of a gas attack, one of the battlefield methods that were common in Owens's day, this could be seen as a focal point or even an extended metaphor that extends throughout the poem. It is also interesting to consider that this poem is believed to have been written in 1970, when Owen was recuperating in Craig Lockhart Hospital, this could explain the structure that was previously lacking in his earlier poems. This poem comprises of four sections, which are literally translated into 4 parts. ...read more.

to as "beggars", they are "coughing like hags", showing how ill they must feel, the fatigue is taking a toll on them, they are like beggars and hags, are similes that carry ark imagery, showing and emphasizing the darkness and dullness of war. The alliteration of "Knock-kneed" again brings poignancy to these opening lines of the sheer exhaustion of these soldiers. The usage of the word "sacks" could carry a hidden meaning of the government putting wool over these soldier's eyes, putting sacks over them that cloud their better judgment. The next paragraph describes a gas attack; the quickening of the pace has already been expounded earlier in this commentary so I shall go more into the detail of this paragraph. These soldiers are "floundering like a man in fire or lime"; they are not clear and hidden by "misty pains and thick green light" and are "drowning". This detailed description of the poison gas just show the intense horrors brought about by this war, and it leaves the reader shaken as you can literally feel the white-hot intensity of that moment, where people are running like on fire, people slowly sinking to the ground like they are drowning. These people are in the multitudes to the point where they all seem blurred, unreal even. These vivid descriptions are just characteristic of Owens's poetry, where his no holds barred policy leaves great impact on the reader. ...read more.

And that is the message that Owen is trying to put forth today. In my personal response, I find it interesting to note that this poem is written in response to the pro-war poet Jessie Pope, where she uses the phrase "Dulce Et Decorum Est Pro Patria Mori" as a title for one of her poems. This could explain why this poem is particularly harsh and upsetting for the reader, as it seems that Owen is trying to make a point that this is a resounding "Lie". I liken his descriptions to that of the age-old belief that when one is faced with a horrific scene, time seems to slow down, even stop. To me, these vivid descriptions are seething with bitter hate and I can literally feel the horror of the war flashing before my eyes, these unsettling images are horrific and probably would haunt anyone who reads this poem carefully. People screaming, people shouting, people flailing about, it seems to be definitely in the realm of possibility in war, and I am hope that I would never have to go through something as terrible as war. In conclusion, Owen makes a very strong stand and point against the war as a whole, and believes that it is a lie to call this war something glorious and honorable to die for, and this phrase "Dulce Et Decorum Est Pro Patria Mori" is a big Lie. ...read more.