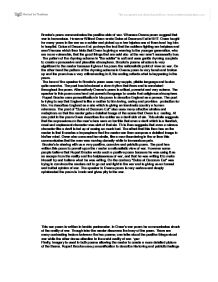 Dulce Et Decorum Vs The Soldier

Brooke's poem communicates the positive side of war. Whereas Owens poem suggest that war is horrendous. However Wilfred Owen wrote Dulce et Decorum Est in1917. Owen fought for many years in the war as a soldier and picked up a few injuries one of them landing him in hospital. Dulce et Decorum Est. portrays the fact that the soldiers fighting are helpless and aren't heroes which then hints that Owen is giving a warning to the younger generation, who are more vulnerable, that the good things that are said about the war aren't necessarily true. The pattern of the rhyming scheme in "the soldier" is soft and uses gentle rhyming couplets to create a persuasive and plausible atmosphere. Brooke's poems structure is very significant to the reader because it gives the poem the nationalistic point of view on war. On the other hand the pattern of the rhyming scheme in Owens poem is very harsh and broken up and the poem has a very critical ending to it, the ending reflects what is happening in the poem. The tone of the speaker in Brooke's poem uses very supple, pliable language and is also quite coercive. ...read more.

This supports the ways in which he feels England has helped the people. Throughout the poem he compares England to a woman, so every time he speaks of England he refers to it as 'she.' He makes it sounds like England has done everything for the people. More specifically I am convinced that he is talking about a motherly role. 'She' is nurturing and all loving which gives her this role. Rupert Brooke uses similes to compare England to the brightness and optimistic things about daytime. This is apparent as it is said, "Her sights and sounds; dreams happy as her day..." This quotation highlights his perception of how positive the sights, sounds and dreams of England were.\par Wilfred Owen also uses imagery in 'Dulce et Decorum Est.' He uses a simile to compare the condition of the exhausted soldiers to hags. This is clear in the line, "Bent double, like old beggars under sacks, knock-kneed, coughing like hags..." By comparing the soldiers to hags, Wilfred Owen expresses his opinion in a very degrading way. He also compares the m to beggars which is not an admirable state to be at in war. ...read more.

Here he describes his feelings in a very simplistic way. It is not as dramatic as Wilfred Owen's way of expressing himself, but then again; the poems bring out two different perspectives of war. Rupert Brooke is very serious and patriotic whereas Wilfred Owen ironically states, "The old Lie: Dulce et Decorum Est Pro patria mori*." He believes the opposite because he has been exposed to the horrifying image of war. Rupert Brooke finds it heroic and brave to fight for ones country, while Wilfred Owen is trying to express the harsh reality of war.\par In conclusion, it has been made clear that the poems are similar in one way yet completely different in the other. First of all, it is important to bear in mind that the message is different in the poems which affects the diction and poetic structure. Rupert Brooke leaves more to the imagination by not describing his every thought to the least detail. The rhyming patterns are unlike along with the form of the poems. The different forms, symbolizes their differences. They have two perspectives to war. Despite these differences, there is one element which they both have in common; their use of imagery. Both poems talk about war and are written around the same time which make them similar in subject. ...read more.