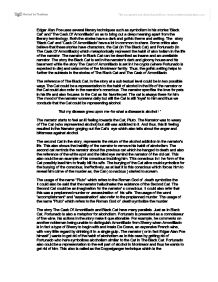 Edgar Alan Poe uses several literary techniques such as symbolism in his stories 'Black Cat' and 'The Cask Of Amontillado' so as to bring out a deep meaning apart from the literary terminology. Both the stories have a dark and gothic theme and setting. The story 'Black Cat' and 'Cask Of Amontillado' have a lot in common to share. Some critics also believe that these stories have characters, the Cat (in The Black Cat) and Fortunado (in The Cask Of Amontillado) which metaphorically represent the habit of alcoholism in the life of the narrator. The narrator in Black Cat can be described as insane and an unreliable narrator. The story the Black Cat is set in the narrator's dark and gloomy house and his basement while the story The Cast of Amontillado is set in the crypts (where Fortunado is expected to die) and catacombs of the Montresor family. Thus, the gothic setting helps to further the subtexts in the stories of The Black Cat and The Cask of Amontillado. ...read more.

"Amontillado" refers to from the mountain. The walk of Fortunado and Montesor is considered to be a parallel to Jesus' walk to Mt. Cavalry before the crucification ( Jesus was weak just as Fortunado who was suffering from cough) and Moses' walk with the Hebrews from Egypt to Mount Sinai to bring the Ten commandments from the mountain. The stories also have many biblical allusions as "I blush, I burn, I shudder" from The Black Cat where burn refers to the flames in hell. Also, the toasts of wine are a direct comparison to The Last Supper of Jesus Christ before his crucification.The usage of "irrevocable Overthrow" refers to the banishing of Lucifer from heaven taking out the feeling of revenge in the story. Thus, the symbolism and the biblical allusions help in bringing out the story in The Black Cat and The Cask of Amontillado. The dark and gothic setting of these stories also help to create the atmosphere and further the tension in the story. Therefore, the gothic setting helps to further the subtexts in the stories of The Black Cat and The Cask of Amontillado. ...read more.