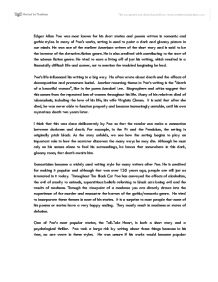 Edgar Allan Poe was most known for his short stories and poems written in romantic and gothic styles. In many of Poe's works, setting is used to paint a dark and gloomy picture in our minds. He was one of the earliest American writers of the short story and is said to be the inventor of the detective-fiction genre. He is also credited with contributing to the start of the science fiction genre. He tried to earn a living off of just his writing, which resulted in a financially difficult life and career, not to mention the troubled beginning he had. Poe's life influenced his writing in a big way. ...read more.

I think that this was done deliberately by Poe so that the reader can make a connection between darkness and death. For example, in the Pit and the Pendulum, the setting is originally pitch black. As the story unfolds, we see how the setting begins to play an important role in how the narrator discovers the many ways he may die. Although he must rely on his senses alone to feel his surroundings, he knows that somewhere in this dark, gloomy room, that death awaits him. Romanticism became a widely used writing style for many writers after Poe. He is credited for making it popular and although that was over 130 years ago, people are still just as interested in it today. ...read more.

One of Poe's most popular stories, the Tell-Tale Heart, is both a short story and a psychological thriller. Poe took a large risk by writing about these things because in his time, no one wrote in these styles. He was unsure if his works would become popular because they were so different from the classical works that people all around him were reading. This story is still popular today because its genre (romanticism) is one that can be related to by almost anyone. People love to read about deepened emotions and out-of-the ordinary characters because it is different from the things we hear about in our everyday lives. His stories aren't the conventional fairytale type and nowadays, people seem to appreciate things out of the ordinary. ...read more.