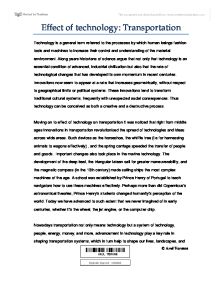 Effects of technology on transportation

Technology is a general term referred to the processes by which human beings fashion tools and machines to increase their control and understanding of the material environment. Along years historians of science argue that not only that technology is an essential condition of advanced, industrial civilization but also that the rate of technological changes that has developed its own momentum in recent centuries. Innovations now seem to appear at a rate that increases geometrically, without respect to geographical limits or political systems. These innovations tend to transform traditional cultural systems, frequently with unexpected social consequences. Thus technology can be conceived as both a creative and a destructive process. Moving on to effect of technology on transportation it was noticed that right from middle ages innovations in transportation revolutionized the spread of technologies and ideas across wide areas. Such devices as the horseshoe, the whiffle tree (i.e for harnessing animals to wagons effectively) , and the spring carriage speeded the transfer of people and goods . Important changes also took place in the marine technology. The development of the deep keel, the triangular lateen sail for greater maneuverability, and the magnetic compass (in the 13th century) made sailing ships the most complex machines of the age. ...read more.

of Carbon Dioxide , Carbon Monoxide , Oxides of Nitrogen and lead compounds , which in excess is undesirable and could prove harmful to environment. Carefully studying this problem , researchers at the Harvard University were able to develop an hybrid series of mechanized system which use wood or electric current as fuel. These new vehicles were proven to be efficient and comparable to normal vehicles which run on diesel (petrol) but turned out to be expensive it was mainly because of the newly developed engine which was sophisticated. Water Since the invention of the first steam boat in 1807 by Robert Fulton, development of AHP's for water terrain seemed highly speculative. This mode of transportation also was noticed to be vital in olden days since there was no option available rather than this to travel to great vicinities such as country to country. Today different types of water transport exist such as ships, rafts, passenger liners, ferries, hydrofoils (hovercrafts), steamboats, yachts, etc. Each type of mechanized system exists for different purposes an ideal example would be comparing yachts and passenger liners. Yachts are mainly used for entertainment or leisure purposes only whereas passenger liners are used extensively for massive transportation of goods and people to long vicinities. ...read more.

The wings of this aircraft is said to be made of Carbon-fibre reinforced plastic, glass-fibre reinforced plastic and quartz-fibre reinforced plastic and additional weight to provide extra stability for a safer and powerful lift off. The aircraft is also said to employ Integrated Modular Avionics (IMA) architecture which was first used in military aircrafts such as raptor F-22 , Eurofigher typhoon. This system consists of a Integrity-178B Operating System and dedicated software housed in onboard processor modules and servers are connected to data communication networks using Avionics Full-Duplex Switched Ethernet with a star topology to communicate with the base station with the option of connecting to 15 satellites on the go with military satellite options in case of emergency. The server present on board aircraft assist the pilot efficiently by automatically performing calculations , showing navigation options rather than olden times where they had to refer to paper charts , manual booklets and handhelds. This aircraft is equipped with a A380-841 Rolls-Royce Trent 900 engine which incorporating swept fan technology and provides a more than needed thrust with the efficiency. Talking about all of this now, we now wonder how far we have reached with the help of technology within no time. What is clear is technology will continue to change transportation and transportation will continue to change our lives. ?? ?? ?? ?? Effect of technology: Transportation (c) Arul Verman ...read more.