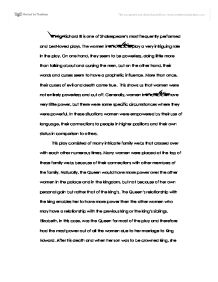 Empowering Women in Richard the Third

King Richard III is one of Shakespeare's most frequently performed and best-loved plays. The women in Richard III play a very intriguing role in the play. On one hand, they seem to be powerless, doing little more than talking about and cursing the men, but on the other hand, their words and curses seem to have a prophetic influence. More than once, their curses of evil and death come true. This shows us that women were not entirely powerless and cut off. Generally, women in Richard III have very little power, but there were some specific circumstances where they were powerful. In these situations women were empowered by their use of language, their connections to people in higher positions and their own status in comparison to others. This play consisted of many intricate family webs that crossed over with each other numerous times. ...read more.

Lady Anne proved to be as smart and quick-witted as Richard and she won a place in many people hearts, whereas Margaret through her constant cursing and unhappiness gave the impression that Margaret was just an annoying character, and this detached her from the reader. The status of each individual gave certain women more power than others. For example, women who were thought of as mean and unworthy of being in the royal family got less power than those who people felt were worthy. The women in Richard III have the incredible ability to predict the future. During the 16th century, curses were taken seriously and you would only place curses on those people which you truly disliked. The main characters in Richard III curse the main character, Richard, so many times that many of them are bound to come true. ...read more.

The women in Richard III had the power of their curses and could therefore get what they wanted through their curses. Near the end of the play the women all curse Richard and wish for his death, and we see that it all becomes true. Richard III showcases the subtle power that women had. Anybody looking at the royal family from outside would not see that women help a great deal of power in their words and in their status, but after a deeper and more in-depth look, we see that this is truly the case. Though men are physically more powerful and are much more aggressive to use their power, women can still be powerful. Shakespeare gives women the power of their words to help them gain power, but for an easier route, they are also able to be empowered through their status and relationships. ?? ?? ?? ?? Empowering Women in Richard III - 3 - ...read more.