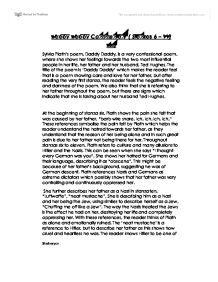 Daddy Daddy Commentary ( Stanzas 6 - 11) Intro Sylvia Plath's poem, Daddy Daddy, is a very confessional poem, where she shows her feelings towards the two most influential people in her life, her father and her husband, Ted Hughes. The title of the poem is 'Daddy Daddy' which makes the reader feel that is a poem showing care and love for her father, but after reading the very first stanza, the reader feels the negative feeling and darkness of the poem. We also think that she is referring to her father throughout the poem, but there are signs which indicate that she is taking about her husband Ted Hughes. At the beginning of stanza six, Plath shows the pain she felt that was caused by her father, "barb wire snare. ...read more.

She further describes her father as a Nazi in stanza ten, "Luftwaffe", "neat mustache". She is describing him as a Nazi and her being the Jew, using similes to describe herself as a Jew, "Chuffing me off like a Jew". The way the Nazis treated the Jews is the effect he had on her, destroying her life and completely oppressing her. With these references, the reader thinks of Plath as alone and emotionally ruined. The 'neat mustache' is a reference to Hitler, but to describe her father as this shows how cruel and heartless he was. The reader knows Hitler to be one of the most vicious tyrants in history, but to refer to someone as this must show their merciless nature. ...read more.

This shows that she disliked the way her father treated her, by making fun of him. The eleventh stanza is a very powerful one, where Plath continues to describe her father in the most horrible ways as possible. "But no less a devil for that". A devil is the complete essence of evil and darkness. The most immoral creature that ever existed is the way Plath describes her father. We further understand this when she describes his of having a "cleft in your chin". This is a feature of the devil which the father had. This shows the reader the immeasurable hatred of Plath towards her father. By the end of the poem, the reader cannot begin to imagine the feelings and emotions of Plath. ?? ?? ?? ?? Sheheryar ...read more.