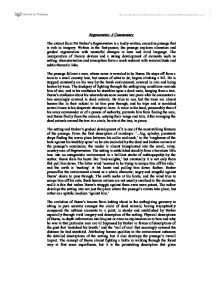 Regeneration: A Commentary The extract from Pat Barker's Regeneration is a tautly-written, evocative passage that is rich in imagery. Written in the first-person, the passage explores alienation and gradual regeneration with masterful changes in tone and vivid language. The incorporation of literary devices and a strong development of elements such as setting, characterisation and atmosphere form a work redolent with verisimilitude and subtle thematic links. The passage follows a man, whose name is revealed to be Burns. He stops off from a train to a small country lane, but unsure of what to do, begins climbing a hill. He is stopped constantly on his way by the harsh environment, covered in rain and being beaten by trees. The drudgery of fighting through the unforgiving conditions reminds him of war, and in his confusion he stumbles upon a dead mole, hanging from a tree. Burns's confusion about his whereabouts soon mounts into panic after he encounters a tree seemingly covered in dead animals. He tries to run, but the trees are almost human-like in their refusal to let him pass through, and he trips and is scratched several times in his desperate attempt to leave. A voice in his head, presumably that of his army commander or of a person of authority, prevents him from fleeing the area, and Burns finally frees the animals, untying their wings and tails. ...read more.

It is his gut-instinct that pulls him through the forest, and this makes the antagonistic nature of the country lane even more pronounced. Burns can almost hardly be classified as a character in Regeneration-he is at the mercy of a malevolent Mother Nature, a shell back from war in need of a commanding voice and healing. Barker's progression from the heavy description of the setting to the fleeting treatment of Burns as a fully-fledged character makes Burns's struggle even more interesting, and adds a new dimension to the passage. Continuing the thread of Burns's almost non-existent development into a character in Regeneration is his relationship with the dead animals. Barker does not flesh out Burns fully in the extract as a character complete with dialogue and a biography, but rather allows other elements to highlight these necessary details. Burns trips uncertainly through the forest, as uncertain as ever and being bogged down with rain and slapping trees, when he encounters the dead mole. The dead mole's hands are folded across its chest, and all it would conceivably need is a small coffin to lie down in. The mole startles Burns, and he panics upon discovering that the tree 'bore them like fruit.' The dead animals are introduced with an element of horror-on the part of Burns, and also in their method of hanging grotesquely from the tree, as though inviting someone to pick them freshly dead and ripe. ...read more.

The change in tone is almost symphonic-Burns's mad scrambling through the forest soars into panic as he encounters the dead animal tree, and then descends into an almost spiritual peace as he sits at the tree with his 'circle of companions.' The tone and atmosphere are gradually developed and changed by Barker throughout the extract, perfectly fitting in with the sequence of events and themes. As Burns approaches regeneration-he is filled with calm and puts his hands down meditatively, a definite change from the trees that are out 'against him,' and the vacant nothingness that enveloped his mind as he walked. The passage from Regeneration by Pat Barker is a work that stands out for its evocative writing and masterful changes in tone and atmosphere. While its descriptions of the harsh elements may seem to be wrought with lucidity, I was struck by how sensitively the author handled the issue of a shell-shocked man returning from war. Such a person would be presumably in need of healing, and Barker was able to depict the beginning of Burns's process of regeneration memorably. Through the use of the antagonistic and well-portrayed environment, the changes in tone and atmosphere and literary techniques, the author has created a passage which is simple yet rich in its appreciation of the nuances of life and the necessities of internal rebirth. ?? ?? ?? ?? ...read more.