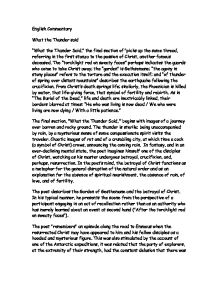 English commentary - what the thunder said

English Commentary What the Thunder said "What the Thunder Said," the final section of "picks up the same thread, referring in the first stanza to the passion of Christ, another famous deceased. The "torchlight red on sweaty faces" perhaps indicates the guards who come to take Christ away; the "garden" is Gethsemane; "the agony in stony places" refers to the torture and the execution itself; and "of thunder of spring over distant mountains" describes the earthquake following the crucifixion. From Christ's death springs life; similarly, the Phoenician is killed by water, that life-giving force, that symbol of fertility and rebirth. As in "The Burial of the Dead," life and death are inextricably linked, their borders blurred at times: "He who was living is now dead / We who were living are now dying / With a little patience." The final section, "What the Thunder Said," begins with images of a journey over barren and rocky ground. ...read more.

As the poet continues to degenerate mentally, the associations within his poem become increasingly incoherent and complex. In the poet's imagination, the road to Emmaus becomes combined with the image of a highway leading out of the war-ravaged territories of Eastern Europe. The poet confuses the sound of airplanes overhead with the cries of mothers who have lost their children ("murmur of maternal lamentation"). The imagery of the poem becomes hallucinogenic and apocalyptic, suggesting mutation, disorder, and hopeless despair ("bats with baby faces, ... crawled head downward down a broken wall"). Standing before a ruined cathedral (perhaps a bomb site left over from the war), the poet concludes that he is at the gates of the Castle Perilous, where the questing knights of Arthurian legend prepared to approach to the Holy Grail. The Chapel Perilous in the Grail legend is a mysterious and deadly place where the hero knight meets with a strange and terrifying adventure. ...read more.

Then the poem seems to collapse into a rush of quotations and allusions-- a flood of meanings and suggestions ending with the word shanti (peace). The final stanza of "once again link Western and Eastern traditions, transporting the reader to the Ganges and the Himalayas, and then returning to the Thames and London Bridge. Eliot's tactic throughout his poem has been that of eclecticism, of mixing and matching and of diversity, and here this strain reaches a culmination. The relevant Upanishad passage, which Eliot quotes, describes God delivering three groups of followers -- men, demons, and the gods -- the sound "Da." The challenge is to pull some meaning out of this apparently meaningless syllable. For men, "Da" becomes "Datta," meaning to give; this order is meant to curb man's greed. For demons, "dayadhvam" is the dictum: these cruel and sadistic beings must show compassion and empathy for others. Finally, the gods must learn control - "damyata" - for they are wild and rebellious. Together, these three orders add up to a consistent moral perspective, composure, generosity, and empathy lying at the core. ...read more.