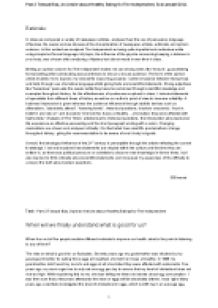 English Coursework Newspaper Health Article &quot;When will we finally understand what is good for us?&quot;

ï»¿Part 2 Textual Bias, An Article about Healthy Eating for The Independent, Eva Lamadé 2011 Rationale: In class we compared a variety of newspaper articles, analysed how the use of persuasive language influences the reader and we discussed the characteristics of newspaper articles, editorials and opinion columns. In this context we analysed The Independent as being quite impartial and meticulous while using simple but formal language. My topic, the influence of the psyche concerning keeping a balance in your body, was chosen after analysing a Mystery text about meals in war-time in class. Writing an opinion column for The Independent makes me use strong verbs like “endure”, guaranteeing formal writing while constructing easy sentences to ensure a broad audience. The form of the opinion article enables me to express my view while reasoning properly; I achieve balance between textual bias and facts through use of emotive language whilst giving facts and scientific statements: Strong adjectives like “hazardous” persuade the reader while they become convinced through scientific knowledge and examples throughout history. As the effectiveness of quotes was explored in class, I include statements of specialists from different times of history as well as an author’s point of view to increase reliability. A balanced impression is given whereas the audience influenced through stylistic devices such as alliterations, “absolutely altered”, “lowering levels”, rhetorical questions, tricolons crescendo, “trust in, belief in and rely on” and isocolons “she told her it was unhealthy. ...read more.

When regarding the Recommended Daily Allowance of 300 mg they decided that more than one egg per day would provide you with too much cholesterol. That is why so many people, including my mum, decided it would be better to relinquish the consumption. However, eggs are now proven to be means of lowering levels of cholesterol in people?s blood. Consequently, the theory of limiting the amount of egg ingestion has now been revealed as completely wrong. In the future, other theories on how to become healthy as well as promotions of special diets against certain diseases will develop, change or be proven as completely nonsense. The view on what is decent for our health seems to be very subjective and fluctuating. History shows us how wrong scientific statements can be, like in the case of the hazardous disease scurvy, caused through a lack of ascorbic acid: According to Dr. James one ounce of fresh lemon juice was enough to wipe all syndromes out. Despite of this statement from 1753, though, more people have died from scurvy than from the two world wars together. An unproven and unverified proclamation itself does not heal you. The next suggestion was made in 1908 when the English physician Sir Archibald Garrod analysed scurvy as an ?inborn error of metabolism?. ...read more.

She actively looked out for recipes against cancer and found the solution in juicy smoothies. Although some scientists are convinced that this is due to the Placebo effect, she insists it is due to her nourishment. Diets against diseases do not have a 100% success rate. Despite following all those specific diet tips, your disease might not vanish at all. Although undertaking exactly what so called specialists state, it might not be working for you. You will have to accept the uniqueness of your body which no one else than you can keep the best under control. You should not pay too much attention on guidelines, how to improve your health, but listen to your body. Chemically, a negative feedback system in your body regulates your body?s balance. Consequently, it is important to listen to your body?s signals. When you feel full, do not take one more plate because of the deliciousness but stop and drink a glass of water instead. Moreover, do not try to eat a lot of salt due to a special diet but stop if your body says so. There are many people who paid attention to those statements and therefore had to endure treacherous diseases due to an overeating of minerals. So take note of your body rather than of unproven statements which may harm you. If people had always listened to recommendations, humans would have been extinct centuries ago. ...read more.