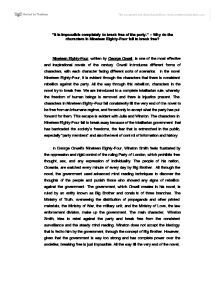 In Orwell's novel, the Outer Party, which is the government that the people of Oceania live under, has taken away all their rights, and only left them with fear. Fear from the government and fear of any sort of rebellion against the party. The right to life has been taken away because a person's life must be dedicated to the Party. A person is created and born for the Party, works for the Party, and dies for the Party. An individual's liberty is taken away as the Party denies the privacy of thought or action. The right of a person pursuing happiness is taken away when all forms of pleasure such as games, sex, and laughter are forbidden. The Outer Party promotes hate and fear among its people, so it may achieve its ongoing drive to maintain power and not permit any sort of escape. The emotions and thoughts of the populations are controlled by a successful combination of thoughts, ideas and high-powered minority groups. In Nineteen Eighty-Four the world is controlled by fear as in the threat of the thought police and the brainwashing of the young through the education system. ...read more.

This comes to symbolize his attempt to reconnect with the past, and try to escape and break free from the present world of total deception and lies. But yet again fails. While the novel draws to an end, the Thought Police finally arrest Julia and Winston for their rebellion, the glass paperweight shatters. Another great symbol of total control eradication and manipulation of the past was the St.Clement's Church picture found in Mr.Charrington's little room rented out by Winston and Julia. The St.Clement's picture is a symbol of a lost past. Winston associates a song with the picture. Winston through the novel struggles to find the words of the rhyme that's linked to the picture. "Here comes the chopper to chop of your head". This is a very important line in the rhyme, as it links to the telescreen that is hidden behind the picture that ultimately leads to Winston and Julia's torturous arrest. This symbolizes the Party's corrupt control of the past. These symbols in the novel only prove the steady control of history that does not allow any character in the novel to be free from a cruel and heartless regime. Furthermore the novel Nineteen Eighty-Four demonstrates the level of a cruel totalitarian society regime could be. With such a regime in total power, the freedoms of the people are lost and breaking free becomes impossible. ...read more.