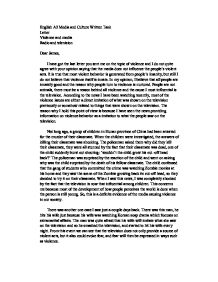 English IA-media and violence. Dear James, I have got the last letter you sent me on the topic of violence and I do not quite agree with your opinion saying that the media does not influence the peoples violent acts.

English A2 Media and Culture Written Task Letter Violence and media Radio and television Dear James, I have got the last letter you sent me on the topic of violence and I do not quite agree with your opinion saying that the media does not influence the people's violent acts. It is true that most violent behavior is generated from people's insanity, but still I do not believe that violence itself is innate. In my opinion, I believe that all people are innately good and the reason why people turn to violence is nurtured. People are not animals, there must be a reason behind all violence and the cause I most influential is the television. ...read more.

The policeman was surprised by the reaction of the child and went on asking why was the child surprised by the death of his fellow classmate. The child confessed that the gang of students who committed the crime was watching Zombie movies at his home and they saw the scene of the Zombie growing back its cut-off head, so they decided to try it on their classmate. When I saw this news, I was completely shocked by the fact that the television is now that influential among children. This concerns me because most of the development of how people perceives the world is done when the person is still young. ...read more.

If the media is used unwisely, it could be used as a source to provide methods of violent and this might cause the society to become more violent and unstable. Another thing is that the television can create unnecessary fear in the society, this is because most of the 'problems' the television shows are not actually happening around us. But, the fear will still cause people to react in certain ways, such as violence. Therefore, most of the violence in the society are somehow linked to the television. I am not sure if I made my points clear, if you have any problems or arguments to make, please send me a letter anytime and we can further discuss this topic. Sincerely your, David ...read more.