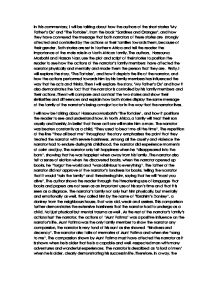 In this commentary, I will be talking about how the authors of the short stories 'My Father's Ox' and 'The Tortoise', from the book "Sardines and Oranges", and how they have conveyed the message that both narrators of these stories are strongly affected and controlled by the actions or their families towards them, because of their gender. Both stories are set in Northern Africa and tell the reader the importance of the male role in a North African family. The authors, Hassouna Mosbahi and Hassan Nasr, use the plot and script of their stories to position the reader to see how the actions of the narrator's family members have affected the narrator physically and mentally and made them the person that they are. Firstly, I will explore the story, 'The Tortoise', and how it depicts the life of the narrator, and how the actions performed towards him by his family members has influenced the way that he acts and thinks. Then I will explore the story, 'My Father's Ox' and how it also demonstrates the fact that the narrator is controlled by his family members and their actions. Then I will compare and contrast the two stories and show their similarities and differences and explain how both stories display the same message of the family of the narrator's being a major factor in the way that the narrator lives. ...read more.

The story is about a male narrator, Mansur, whose age is not provided in the story, who lives with his mother, his "younger brothers" and an ox, which was seen as a very valuable animal towards the family. Mansur's father had passed away before the story but it is evident that his actions are still strongly impacting on the narrator's life. The story begins by Mansur telling the reader of the ox and its fatal condition. The ox is dying and this isn't a good sign for the family, as it is the main source of income. Mansur's father had bought the ox and worked the fields when he was alive and when he died, Mansur had to "shoulder the responsibilities of the farm". Nasr shows the reader that Mansur had been forced into a position of responsibility, just because he was the eldest son. This was an uncomfortable and unpleasant experience for Mansur and this is shown to the reader as he tells of how he is "sick of the whining of those pulleys" while he is "drenched in sweat". Mansur does not want to keep the ox and has tried to "rid himself of it", but has always found his mother "obstructing" his way. Nasr tells the reader through that passage of text, that even though Mansur wants nothing to do with the ox, his mother is in control and Mansur is obliged to obey. ...read more.

The narrator in "The Tortoise" ends up with a fulfilling life full of experiences and knowledge where as the story "My Father's Ox", Mansur's future is not yet discovered as the story ends with the ox's last minutes. In the story "the tortoise", the narrator's father plays a very physical role in the narrator's life, this affects the narrator's physical and mental state. Mansur's father on the other hand, has passed away, but the things that he did when he was alive are still strongly impacting on Mansur's life. Even though the father roles in the two stories are quite different, both fathers are shown to be the main impact on their sons' life. Both authors show here that in North African culture, the main person of the household is the father, and controls nearly everything of family. In conclusion, both stories, 'The Tortoise' by Hassouna Mosbahi and 'My Father's Ox' written by Hassan Nasr, clearly demonstrate that the narrators of the stories, being male, are affected and influenced by their family members in such a way that it makes them the person that they are. Both authors tell the readers that this is how the male children of North Africa are treated and clearly demonstrate their roles in the family. Thankyou. ...read more.