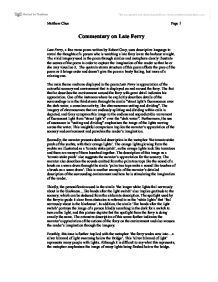 Commentary on Late Ferry Late Ferry, a free verse poem written by Robert Gray, uses descriptive language to reveal the thoughts of a person who is watching a late ferry leave the harbour at night. The vivid imagery used in the poem through similes and metaphors clearly illustrate the scenes of the poem in order to capture the imagination of the reader so that he or she may visualise it. The quatrain stanza structure of this poem affects the pace of the poem as it brings order and doesn't give the poem a hasty feeling, but more of a relaxing one. The main theme and tone displayed in the poem Late Ferry is appreciation of the colourful scenery and environment that is displayed on and around the ferry. The fact that he describes the environment around the ferry with great detail indicates his appreciation. One of the instances where he explicitly describes details of the surroundings is in the third stanza through the simile "street light's fluorescence over the dark water, a ceaseless activity, like chromosomes uniting and dividing". ...read more.

In addition, the simile 'like hands after the light switch' portrays the image of a person blindly searching in the dark for a switch to turn on the light, and this picture depicts that the spotlight from the ferry is doing exactly the same. The extensive description of this scene further indicates the narrator's appreciation of the actions of the ferry on the environment and also arouses the reader's imagination through the imagery. Fourthly, this tone is further implied with the metaphor 'the ferry wades now into...a silver blizzard of light swarming below the Bridge'. This 'silver blizzard of light' represents many people with lights. Although it is difficult to say what this represents, the metaphor emphasises the image of many lights being flashed below the bridge. Furthermore, the narrator uses a metaphor to describe the lights as the light glittering off thousands of people wearing 'silver lam�' in a 'Busby Berkley spectacular'. Busby Berkley was a movie choreographer that involved many people and was bright. ...read more.

Additionally, the narrator compares the ferry to a movie through the comparison 'One does seem in a movie theatre...that the boat is small as a moth wandering through the projector's beam'. In movies, boats are usually viewed leaving from a distance as the main character is on it, or is attached to it in some way. Likewise in this poem, it implies that the narrator has some sort of physical or emotional attachment to the 'late ferry'. The consistent use of elaborate and insightful descriptions throughout the poem Late Ferry is one of the reasons why I believe that this poem's purpose is to provoke and stimulate the imagination of the reader so that he or she may visualise the scenes that the narrator views. The observant and insightful descriptions of the ferry and the surrounding environment also lead me to believe that the narrator is displaying a tone and theme of appreciation to the ferry and the surrounding environment. Finally, I believe the narrator has a physical or emotional attachment to the ferry that is leaving through the elaborate description of it and because he watched it from when it started leaving, until it disappeared from view. Matthew Chua Page 1 ...read more.