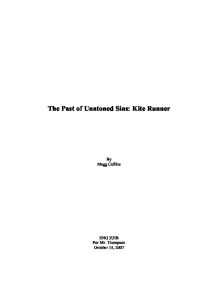 The Past of Unatoned Sins: Kite Runner

Khaled Hosseini’s allegorical novel, The Kite Runner tells the story of the rise and downfall of the relationship of the main characters, Amir and Hassan, and inadvertently the rise and downfall of Afghanistan. More importantly, is how the main characters are symbolical to important Afghani figures, and how the main themes of this novel are symbolical to Afghani life. The novel, The Kite Runner is an excellent example of an allegory between the powerful story told throughout the pages, and the everyday life of Afghanistan.

Firstly, in Khaled Hosseini’s novel, the main characters of the novel prove to be highly symbolic to important Afghani figures. Amir the narrator of the story tells his story as a young coward child and his growth into a brave man who is ready to stick up for him and the one he loved most. Amir’s defining moment as a child is when he makes the ultimate decision “I had one last chance to make a decision. One final opportunity to decide who I was going to be… In the end, I ran. I ran because I was a coward.” (Hosseini 77) This moment marks Amir as a coward. Amir represents the average Pashtun. Too afraid for sticking up for what is right, but then thinking being sympathetic is enough.

Assef is another very important character in the novel. He is a bully, the brutalizer of Hassan, the destructor of Hassan’s childhood innocence. Later on in the story, Assef becomes a member of the Taliban. “The Talib, looking absurdly like a baseball pitcher on the mound, hurled the stone at the blindfolded man. It struck the side of his head.” (Hosseini 271) Assef represents all Pashtun extremists, typically the Taliban. Unlike

Amir, who taunts Hazaras because he is afraid to stick up for himself or them, Assef feels he resembles Hitler, and that Hazaras deserve to be wiped out.

Hassan, the loyal half-brother, and best friend of Amir, is the most important figure in the book. Hassan represents all Hazaras. The actions against him are the actions against his race. Hassan also represents the purity, strength, and happiness of his people. While Amir is rich, he is terribly unhappy, while Hassan is a slave and doesn’t have a cent to his name, but is constantly happy, and keeps up a pure and strong character. “He’d referred to Assef as “[sir]”, and I wondered briefly what it must be like to live with such an ingrained sense of one’s place in hierarchy.” (Hosseini 42) Even after Assef insults Hassan, Hassan stays polite, not because he is weak, but because he is strong enough to be true to himself. Amir the typical Pashtun, Assef the Pashtun extremist, and Hassan the Hazara boy, are representative of the typical figures commonly found in Afghanistan.

Secondly, in Hosseini’s book, The Kite Runner, Themes play important part as an allegory to aspects of Afghani life. One of the most important themes in The Kite Runner is the idea of “living life as a lie”. Baba, Amir’s proud father, is a strong believer of the evil of theft. “There is only one sin. And that is theft… When you tell a lie, you steal a man’s right to the truth. Hadn’t he said these words to me?” (Hosseini 225) The irony of this is when Amir finds out that Hassan is actually his half brother; Amir comes to realize his father, who he deeply admired, was living one big lie, fathering an illegitimate Hazara boy, and keeping the truth from everyone except for his best friend, Rahim Khan. This symbolically represents the ignorance of Afghanistan. Hassan was everything Baba

wanted but had to be hid in the shadows because of racial prejudice. If Afghani’s could come to realize people of greatness come in all races, they could start to overcome the wars that ravage their lands, instead they take their problems out on lower races, forever stopping them from achieving any power or rule which could flip the country’s state.

Another important message in the book is “the bond of brothers”. Amir and Hassan have deep blood ties, in friendship and brotherhood. The only thing that stops their friendship from reaching its potential, is Amir’s fear of being perceived as weak, and his cowardice as a child, not being able to stick up for Hassan in one brutal moment. Amir only comes to realize the importance of Hassan’s friendship to him as a grown man. “Hassan had loved me once, loved me in a way no one ever had or ever would again. He was gone now, but a little part of him lived on.” (Hosseini 227) This important message represents the downfall of Afghanistan. If Pashtun’s could come to realize their dependence on the Hazara race, and their love, and friendship with this lower class, their country could be great. Ignoring these facts, and trying to ignore the brotherhood that exists between people, racial differences aside, leads to the downfall of many countries. Hitler and the persecution of the Jews led to the downfall of Germany. People need to learn to set aside differences of race to work together, and bring their countries to greatness.

The last major important theme in the novel is the concept of “redemption, avengement, and penance for sins in the past”. In the novel, the growth of Amir from a

scared, weak, coward child, to a brave and risk taking man, who will give his life for another, marks an important concept.

“[Farid] ‘let me save you the trouble! Nothing you remember had survived. Best to forget… [Amir] I don’t want to forget anymore.” (Hosseini ?) Amir returns to Afghanistan after escaping to America to forget his past. He amends his sins by saving Hassan’s young son from Assef, now a powerful Taliban officer. He risks his life for the boy, in order to make up for never sticking up for Hassan, or telling anyone what happened. This theme is very important to the book, and to life. This represents hope for Afghanistan. If it can acknowledge the wrongs that it has made, and make an effort to change what it has done to humanity, it could bring peace to its country.

In Conclusion, The Kite Runner is an excellent example of an allegory from a compelling and heartfelt story of two brothers to the rise and downfall of Afghanistan. Both the characters and themes in the novel are symbolic to Afghani figures and general life. Hosseini’s fictional symbolical concepts have great meaning in everyone’s life, and if people were brave enough to take charge, they could overcome their “unatoned sins” and become truly great.