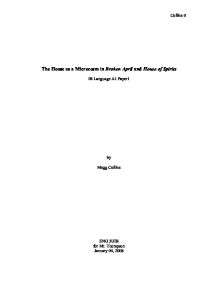 The House as a Microcosm in Broken April and House of Spirits IB Language A1 Paper1 by Megg Collins ENG 3UIB for Mr. Thompson January 04, 2008 The word house as defined by Merriam Webster Dictionary is "a building that serves as living quarters for [a family]. In the two world literature novels The House of the Spirits by Isabel Allende, and Broken April by Ismail Kadare, houses and similar structures are used as a microcosm to the macrocosm of higher meaning. Specifically, the two works are representative of culture, and in addition characteristics of the protagonists and antagonists. Firstly, in Allende's novel The House of the Spirits, the two main houses are symbolic of Chilean culture. The Tres Marias originates as an estate in the prime of Chilean history. When a main character Esteban Treuba arrives he understands the work he'll have to put into the "nightmare, full of rubble [with] half the tiles [broken], and a tangle of vines [that] had grown through the windows and covered most of the outside wall" (Allende 49). The house's true beauty is covered with insignificant vines that needed to be purged before it could be once again considered a fancy estate. ...read more.

The silence that had stifled it was suddenly filled with music. And its grim walls seemed to soften" (Kadare 47). Ismail himself acknowledges the ominous kullas through his diction. The first part of each statement is written with negative nuance, and the second part with positive. Secondly, in The House of the Spirits by Isabel Allende, the image of a house is used as a microcosm in relation to main characters. Clara is one of the main characters, and plays an eccentric and odd role. The joys of her life occurred most when she was young, as a result of her uncle Marcos, her puppy Barrabas, and the love she has for her family. However her clairvoyance allows her to view misfortunes before they happen and those along with the death of Barrabas on her wedding foreshadow the downfall of her happiness in the future. Clara's eccentricities are reflected on the big house on the corner in which "every time a new guest arrived, she would have another room built in another part of the house, and if the spirits told her that there was a hidden treasure or an unburied body [she] would have a wall knocked down" (Allende 93) ...read more.

Diane is the only female protagonist character of the novel, and she shares a connection to Ggorj based on their similar views. Her husband Bessian is in awe of the mountaineer lifestyles, but Diane is appalled at the acceptance and visibility of death. As the plot of the story develops "she felt as if something was collapsing in her" (Kadare 78) and when she viewed the kulla for the first time she refrained from laughing at the mirth of her husband "perhaps [from the] shadow of the tower (stone casts a heavy shadow, the old man said) [putting] a weight on her heart" (Kadare 86). As a result, the reader can again see the parallel reflections of the house and the character. In conclusion, the two world literature novels The House of the Spirits by Isabel Allende and Broken April by Ismail Kadare use the imagery of a house or a similar structure as a microcosm to the culture and characters. Furthermore, the authors enlighten the reader to the possibility of a "house" being more than just a home, by either lacking a coordinated family unit and humane controlled emotions, or by adding a touch of magical realism. ...read more.