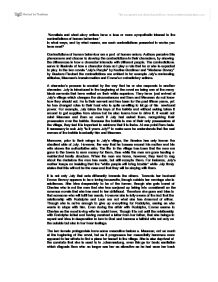 'Novelists and short-story writers have a less or more sympathetic interest in the contradictions of human behaviour.' In what ways, and by what means, are such contradictions presented in works you have read? Contradictions of human behaviour are a part of human nature. Authors perceive this phenomena and choose to develop the contradictions in their characters, by showing the differences in how a character interacts with different people. The contradictions serve to illustrate of how a character does not play a role that he or she is expected to play. In the two novels "July's People" by Nadine Gordimer and "Madame Bovary" by Gustave Flaubert the contradictions are evident in for example July's contrasting attitudes, Maureen's transformation and Emma's contradictory actions. A character's persona is created by the way that he or she responds to another character. July is introduced in the beginning of the novel as being one of the many black servants that have waited on their white superiors. They have just arrived at July's village which changes the circumstances and Bam and Maureen do not know how they should act. ...read more.

She tries desperately to be of the former, though she gets bored of Charles who is not the man that she has conjured up taking into consideration the romance novels that she has read in her childhood. Therefore she goes and tries to find someone who will fulfil her needs. However she is fully aware of the fact that the relationship with Rodolphe and Leon are not what she has dreamed of either. Though she is na�ve enough to give up everything for Rodolphe, seeing as she wants to elope with him. Even during the affair with Rodolphe, Emma seems to Charles as the most loving wife he could have. Though it is not until the relationship with Rodolphe failed and having received a letter from her father, that she beings to repent and tries in desperation to turn to God and become a faithful wife not only on the outside but also in her inner feelings. The two female protagonists have some masculine features. Maureen, not so much at the beginning of the novel, but as it progresses her masculinity becomes more apparent in her efforts to find a place for herself in the village. ...read more.

Another example of her dominance in the marriage is when they are at the ball, Emma tells Charles not to dance as he will make a fool out of himself with his clumsiness. However, Emma has less claim to be at the ball as she is only a peasant's daughter while Charles is at least middle class. Furthermore she dreams of belonging to the upper class, even though she knows that she will never fit into the picture as she is after all married to Charles. In conclusion, the authors develop the contradictions and incorporate them when developing a character. It is evident that people will have different reactions and emotions concerning various people which may contradict some of their actions or role in society. July shows a different side to himself confusing Maureen. Through this and other factors, she develops herself into a more masculine figure who becomes more independent of her family, symbolized by her crossing of the river at the end of the novel, while Emma is shown to be stuck in her situation and the only way out is concluded to be death. ...read more.