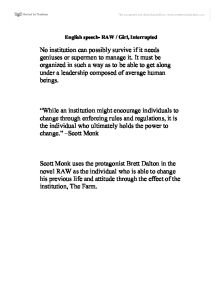 English speech- RAW / Girl, Interrupted. Scott Monk uses the protagonist Brett Dalton in the novel RAW as the individual who is able to change his previous life and attitude .

English speech- RAW / Girl, Interrupted No institution can possibly survive if it needs geniuses or supermen to manage it. It must be organized in such a way as to be able to get along under a leadership composed of average human beings. "While an institution might encourage individuals to change through enforcing rules and regulations, it is the individual who ultimately holds the power to change." -Scott Monk Scott Monk uses the protagonist Brett Dalton in the novel RAW as the individual who is able to change his previous life and attitude through the effect of the institution, The Farm. Scott sets the readers mind straight away with the first 3 words of the book, "busted, Brett panicked." The reader immediately registers that Brett is a criminal which emphasizes the dramatic change Brett experiences during his stay on the farm. ...read more.

An example of this is the way that Josh. He, demonstrates to everyone that reads the book that institutionalisation can indeed be a positive experience. Brett admits this "positive experience" in the ending of the novel where Sam questions him, "did you learn anything while you were here?" to which Brett answers, "yes, of course. Lots of stuff. Like friendship, trust, love, and loss." This to me sounds like words coming from a normal, happy, average human being. The concept of change in an individual is equally evident in Susanna Kaysen in the movie Girl, interrupted. The director, James Mangold, introduces the main character in a similar fashion to how Scott Monk introduces Brett Dalton in Raw. Susanna Keysen's faults and flaws are exposed immediately, first seen being taken to the hospital after trying to kill herself with vodka and Aspirin pills. ...read more.

She imitates Janet Webber's racist comments and mocking tone when she had her clothes denied due to the lack of eating. One day while escaping the world with Lisa, Susanna discovers that sometimes to be sane can be a choice to some people; everyone is insane, but the insanity is to be kept to yourself, and if expressed, you are considered to be crazy. Something's are just not meant to be said. The line between normal and crazy is a blurry one even in today's world. I believe sane and insane can be defined as common or uncommon behavior. Support and help is still given without having to be hospitalized. In the end of the novel, Susanna "recovers" from her diagnosis although she never really understood it or even knows if she really is "recovered." She feels the same way about leaving the hospital as when she came in the hospital. Was she ever crazy? "maybe, or maybe life is" ...read more.