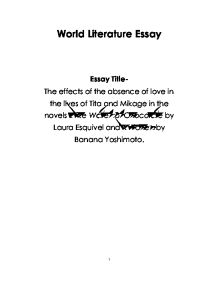 World Literature Essay Essay Title- The effects of the absence of love in the lives of Tita and Mikage in the novels Like Water for Chocolate by Laura Esquivel and Kitchen by Banana Yoshimoto. Love, a strong and positive emotion of regard and affection is an emotion that remains masked in the hearts of Tita and Mikage. This absence of love from their lives was like is a stab in the heart for the two characters, Tita from Like Water for Chocolate and Mikage from Kitchen, as it leads to a life which is hollow and leaves them to be deserted. The absence of love brings about a lot of changes in the way these characters look at life; they pursue exploring substitutes for love. Both these characters use food as a substitute for the absence of love in their lives, which is what links both these characters to the kitchen. Tita is denied love the moment she enters this world, we can see this from the quote "Tita had no need for the usual slap...because she was already crying as she emerged; maybe it was because she knew... it would be her lot in life to be denied marriage" (Laura Esquivel, 1992, p. 6; subsequent citations refer to this edition and appear in the text). The quote definitely foreshadows Tita's destiny, the writers lexical field is consisting of negative words such as "slap", "crying", "denied" to show us the importance of this event as it suggests that Tita was doomed from birth. ...read more.

The writer uses a simile "like dry labor" to compare the physical torture that Tita was putting herself through, the words "dry" and "labor" suggest torture and distress. The reason for her sadness is evident, as it had been foreshadowed at the start, she has been denied marriage, her mother Mama Elena denies legitimate love in marriage. Mikage still was not able to accept the fact that her only family member, her grandmother had died. "Three days after the funeral I was still in a daze. Steeped in a sadness so great I could barely cry, shuffling softly in gentle drowsiness, I pulled my futon into the deathly silent, gleaming kitchen" (p.4) the writer creates an atmosphere of complete loneliness in the life of Mikage with her grandmother's love. The use of sibilance catches the readers attention as the words contribute to the loneliness, isolation and grieving in Mikage's lonely life. The quote "deathly silent, gleaming kitchen" this gives us Mikage's perspective on the situation, as we can tell that she is looking for a substitute for her absence of her grandmother's company and love. Both these characters are suffering from the absence of love, Tita is receiving some from Nacha, but it is not the love she wants, she wants to be loved by Pedro like a wife. ...read more.

her, Nacha died leaving Tita alone to suffer the ruthless Mama Elena, while Pedro on the other hand decided to marry Rosaura to be close to Tita which had the total opposite effect in their lives. Therefore Tita never really got the love that she wished, until Mama Elena and Rosaura's deaths. Mikage on the other hand, never experienced love that she wanted, love from Yuichi or her parents her grandmother who was her only family member, died and left Mikage to face the world all by herself. Both characters wished they received love; Tita wished she got the kind of love that Pedro had with Rosaura. She wished she had had the child with Pedro instead of her sister Rosaura. Mikage on the other hand wished she could live with Yuichi for the rest of her life, she longed for love from her parents, who were never there to provide it. Overall both character do end up finding their, after overcoming all the obstacles in their way. But the cost that they had to pay was tremendous; Tita had to live nearly all her live single, and unloved and unwanted. Mikage who has to live her entire life without experiencing love from her beloved grandmother. To conclude I would like to say that the effects of the absence of love on the characters were both positive and negative as both of the characters became stronger towards the end. ...read more.