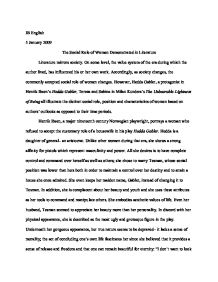 IB English 5 January 2009 The Social Role of Women Demonstrated in Literature Literature mirrors society. On some level, the value system of the era during which the author lived, has influenced his or her own work. Accordingly, as society changes, the commonly accepted social role of women changes. However, Hedda Gabler, a protagonist in Henrik Ibsen's Hedda Gabler, Tereza and Sabina in Milan Kundera's The Unbearable Lightness of Being all illustrate the distinct social role, position and characteristics of women based on authors' outlooks as opposed to their time periods. Henrik Ibsen, a major nineteenth century Norwegian playwright, portrays a woman who refused to accept the customary role of a housewife in his play Hedda Gabler. Hedda is a daughter of general- an aristocrat. Unlike other women during that era, she shows a strong affinity for pistols which represent masculinity and power. All she desires is to have complete control and command over herself as well as others; she chose to marry Tesman, whose social position was lower than hers both in order to maintain a control over her destiny and to attain a house she once admired. She even keeps her maiden name, Gabler, instead of changing it to Tesman. ...read more.

Tereza prefers spiritual, platonic love to earthly love. Unlike Hedda who intentionally utilizes her body to achieve her goal, Tereza believes that all bodies are identical, hence worthless. She even disdains her youth and beauty: "Youth and beauty were overrated and worthless" (Kundera 46). She fell in love with Tomas because his voice had a power to summon forth "her timorous soul from its hiding place in her bowels" (55) which distinguishes her from other dull bodies. However, whereas Tereza is "heavy," Tomas is "light"; he has had a myriad of "erotic friendships" with other women, even after he fell in love with Tereza. Their careers signify this contrast; Tereza is a political photographer who emphasizes individual characteristics while Tomas is a doctor who is fascinated with human body itself. But Tereza who once abandoned her nation for love is brave enough to sacrifice and adjust her own lifestyle for love again. She is willing to embrace Tomas' lifestyle in order to retain her love. She was aware that she is too "heavy" for Tomas and "had become a burden to him: she took things too seriously, turning everything into a tragedy, and failed to grasp the lightness and amusing insignificance of physical love" (143). ...read more.

That is why she states, "A man who gives it up of his own free will is a monster" (113) to eschew internal relationships. However, she also felt relieved after she broke up with Franz since "she had longed to come to the end of the dangerous road of betrayals" (116). Deep inside her mind, she is afraid to be involved in one matter. She is emotionally unaccustomed to deep relationships with others. Later she regrets her cowardice of not taking action to achieve her love as Tereza did: "Gradually, timorously, their vocabularies would have come together, like bashful lovers, and the music of one would have begun to intersect with the music of the other" (124). As with Hedda and Tereza, Sabina has another hidden side of herself that is not shown on the surface. Each female protagonist described in Hedda Gabler and The Unbearable Lightness of Being has unique characteristics and personalities which demonstrate the ways in which the authors respectively rejected the sense of values based on their era. Both Hedda and Tereza are aggressive with their relationships with others to achieve their goals. On the other hand, Sabina is scared to deeply interfere with others. A personal priority of values may differ from one individual to another, but it decides which role is more appealing than others in order for each role not to be underestimated based on bias. ...read more.