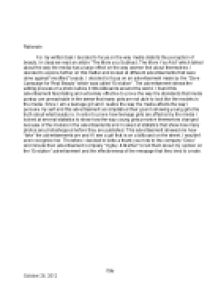 English Written Task IB. I decided to write a thank you note to the company Dove and include their advertisement company Ogilvy &amp; Mather to tell them about my opinion on the Evolution advertisement

﻿Rationale For my written task I decided to focus on the way media distorts the perception of beauty. In class we read an article ?The More you Subtract, The More You Add? which talked about the way the media has a large effect on the way women feel about themselves. I decided to explore further on this matter and looked at different advertisements that were done against ?modified? beauty. I decided to focus on an advertisement made by the ?Dove Campaign for Real Beauty? which was called ?Evolution?. The advertisement shows the editing process of a photo before it hits billboards around the world. I found this advertisement fascinating and extremely effective to prove the way the standards that media portray are unreachable in the sense that many girls are not able to look like the models in the media. Since I am a teenage girl and I realize the way the media affects the way I perceive my self and this advertisement accomplished their goal in showing young girls the truth about what beauty is. In order to prove how teenage girls are affected by the media I looked at several statistics to show how the way young girls perceive themselves changed because of the models in the advertisements and I looked at statistics that show how many photos are photoshopped before they are published. ...read more.

Even though many girls know this, they still attempt to look like the models in the advertisements. Photoshop is becoming a fundamental requirement for photos. Farid, a professor of computer studies at Dartmouth College that studied retouching said ?On women I most often see wrinkles erased, skin smoothed, body far trimmed, and boobs made bigger and more gravity- defying?. Girls like myself might not realize how much editing is done to a photo before it is published and I believe your advertisement ?Evolution? manages to give us an idea of how the media manages to manipulate our perception of beauty. I am also thankful to you for choosing the advertising company ?Ogilvy & Mather? for bringing your thoughts into reality. I believe that it?s a very strong advertising company and it manages to bring the customers requirements into reality, I have read that ?Ogilvy & Mather? has done other ?Real Beauty? advertisements for you and other advertisements against smoking, anti homophobia and other types of advertisements, therefore I believe they are experienced in the ?anti ads?. One of their slogans is ?Never run an advertisement you would not want your own family to see?. I think it?s a very strong statement, and the ?Evolution? advertisement proved their point. ...read more.

I think girls don?t realize how much editing is being done to a photo before it is published. Girls might think that brightness/contrast, colors, and the definition of photos are adjusted. The Vermont department on health analyzed your add and looked through the changes that were made to the model and these are the examples that they stated ?artificial lighting, makeup applied, blemishes covered, hair curled and styled, artificial wind blown hair effect, hair color was changed to be more reddish and highlighted, eyes enlarged, neck sculpted, eyebrows shaped, hair made to look fuller, forehead and face slimmed and lips enlarged? I believe your add did a wonderful job to show how much work is put into an advertisement before it is published. The model that was in your advertisement changed incredibly from the moment she walked into the photo-shoot to the moment that her face was on a billboard. Girls don?t recognize the changes until they see the whole process, and your ?Evolution? advertisement managed to show the way media distorts the perception of beauty in a very clear and effective way. The ?Evolution? advertisement managed to boost my self- esteem and made me realize that the standards in the advertisement are unreachable even for the models themselves. Thank you. ...read more.